Peterborough, NH, USA — Cutting-edge search giant Google doesn’t greenwash when it comes to sustainability. The company has invested billions of dollars in clean energy developments through renewable energy and transmission projects all across the country.

In 2007 Google set a goal to become carbon neutral. At the same time Google announced its initiative to make renewable energy cheaper than coal (RE < C). Soon after, it took a long hard look at its own energy use, embarking on a journey to cut the energy used by all of its data centers. That resulted in data centers that consume about half of the energy that otherwise similarly sized data centers consume, according to Rick Needham, director of green business operations and strategy for Google. Needham was a keynote speaker at the American Wind Energy Association (AWEA)’s most recent Windpower 2011 event in May 2011.

During his keynote speech, Needham explained how Google expected to meet its self-set carbon-neutral mandate. He said that once the data centers were the most efficient they could be, the company sets its sights on renewables. “Efficiency doesn’t get you to zero,” said Needham, “and so our next step was to go and seek and use renewable energy.”

About 18 months ago, Google announced that it had applied for and received from the Federal Energy Regulatory Commission (FERC) the authority to buy and sell power at wholesale rates – essentially setting itself up as a utility called Google Energy LLC. The announcement sent energy bloggers into a frenzy wondering what Google had in mind by doing this. Many bloggers wondered if Google was going to start delivering energy the way it delivers search results.

Soon after that announcement was made, an answer to that question emerged: Yes, Google would be selling energy but only so that it could purchase clean energy at wholesale rates and retain the renewable energy credits (RECs).

The latest deal shows how it works. In April, Google announced that it would be buying the output from a wind energy farm in Oklahoma, the second deal it had made under Google Energy LLC. The Minco II wind farm has a planned capacity of 100.8 MW and is being developed by NextEra Energy Resources. Google has signed a PPA to purchase the power from that wind farm through Google Energy LLC. In addition, Google is building a data center that will operate on the same power grid.

Since Google’s goal is to be carbon neutral, it needs all of that wind energy to power its data center but energy can’t be transmitted over the grid that way. Indeed, there is no way for Google to guarantee that the power it is purchasing from the wind farm will actually power its data center. So in order to guarantee that Google is receiving the benefits of that green energy, Google Energy LLC signed a 20-year PPA for the power. Google then gets to keep the RECs and sells the “brown power” back onto the grid. See the diagram below for an illustration of how the power deal works. 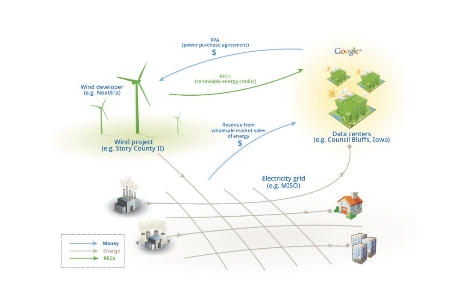 The diagram above shows Google Energy’s model for purchasing wind power from a developer, retaining the RECs for itself and selling the power back onto the grid. Courtesy Google Energy LLC. View a larger version of this image at this (PDF) link.

The “brown power” is sold back to the grid at current wholesale prices, which will amount to a small loss for Google for the short-term. Google said that it hopes it will recoup its investment over time as power prices rise in the future.

As Google writes in its white paper, titled “Google’s Green PPAs: What, How, and Why”

Even if we can’t legally or physically transfer the power to our facility, being in the same power market ensures we are contributing to greening the grid where we operate. For example, under our first PPA with NextEra, we contracted to buy 114 MW of wind power for 20 years from a project in Ames, Iowa that we “use” to power our data center in Council Bluffs, Iowa. With our subsequent and latest PPA in Oklahoma, we are adding another 100.8 MW of wind power that we similarly use at our data center in Mayes County, Oklahoma.

Why Not Just Buy the RECs?

Google’s foray into the energy business is groundbreaking and innovative for a number of reasons. The company could have simply purchased RECs for the wind farm and been done, but that wouldn’t have helped it meet it’s goals of additionality. Google has said that it wants its purchase of green energy to spur additional investment in renewable energy. If a wind power developer had already built a wind farm and was happily recovering its investment and then simply sold the RECs from the wind farm to Google, nothing would change going forward. In the scenario that Google has set up, however, by signing a PPA with NextEra, a “serial developer of wind farms,” Google has guaranteed NextEra a steady stream of income that it can then use to develop another wind farm.

Kylah McNabb is a Program Manager for Community Development at the Oklahoma Department of Commerce. Her focus is on wind power and the job benefits it brings. “We recognize the economic developments that wind can provide,” she said.

McNabb sees Google’s innovative business model as “fascinating.” She said that the project meets all of Google’s needs: obtaining the green power, supporting the general wind market overall, and spawning an additional wind project in the state, while also supporting local economic development that would not have happened had Google just gone to the market and purchased the RECs.

While she hasn’t spoken directly with NextEra about the business model, she is pretty sure that as a developer, it is very happy with the arrangement. “If I were a developer, I’d be very excited because it’s literally a new player in the ball game that you never had before and a more willing market participant,” she said.

McNabb said she hopes other big energy-intensive companies like Dell and Microsoft will follow suit. “When one company does it, it kind of sets a standard and expectations start to go up,” she said.

“When Google can prove that it makes good financial sense, it’s very hard for the Microsofts and the Apples and the others to argue that it doesn’t,” she explained.

Should utilities be worried? McNabb said that at least in Oklahoma, where utilities are already running 10-12% wind on their grids, they don’t need to worry about not meeting their goals with wind power development. “Its not like they are at 3-5% and in a mad race to try to get more wind,” she said.

She acknowledges that utilities could feel threatened by Google Energy’s quasi-utility model but hopes that they will recognize the economic development benefits that occur from this happening. “If you look at market rates, at least another $150 million in capital investments are going into Oklahoma, which ensures that people will be on the ground working, new permanent jobs will be created, and funding will flow into the local community via lease payments to landowners and other means. Everyone truly has a chance to benefit overall,” she said.

Certainly new business models give pause to those who are firmly rooted in the “old way” of doing business. “It’s outside of the box from a traditional model and whenever you do something like that people always have a lot of questions,” McNabb said.

In terms of advancing clean energy development, however, it’s a step in the right direction and that is definitely what Google has in mind. “I think it’s very fascinating and very groundbreaking and we’re excited that Oklahoma is part of it,” McNabb said.

Both the data center and the wind farm are expected to go into operation later this year.