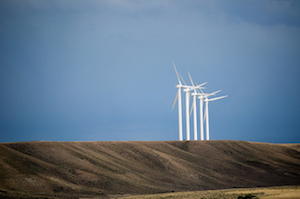 This week in Wyoming, legislators introduced a new law that would keep the state’s utilities from purchasing utility-scale wind and solar power produced inside or outside of Wyoming.

Sponsored by two state senators and seven state representatives, the bill (SF71 – Electricity production standard) says that in 2018, Wyoming’s utilities will obtain a minimum of 95 percent of their sales of electricity in the state from “eligible generating resources.” Those eligible resources include electricity generators located in Wyoming or delivering power into Wyoming that produce power from coal, hydroelectric, natural gas, nuclear, oil and net metered systems (solar, wind, biomass, and hydro with a maximum capacity of 25 kW). The bill calls for utilities to obtain all electricity from those eligible resources in 2019.

In a tweet yesterday, Wyoming’s Powder River Basin Resource Council said it has received “a lot of calls” about the new bill. “Industry analysts, investor services, and the public are paying attention,” the tweet said.

Sean Gallagher, vice president of state affairs for the Solar Energy Industries Association, said in a statement today: “We are still reviewing the legislation and not prepared to fully comment on its potential consequences at this time. However, upon initial review, the bill appears to be overly restrictive in nature and that could mean ripple effects for the state’s solar industry, which is just beginning to grow.”

Wyoming, which has no renewable portfolio standard, is rich in wind resources. The University of Wyoming’s Wind Research Center ranks Wyoming seventh in the U.S. for total wind power potential. The state also is a major coal state — producing 42 percent of the coal mined in the U.S. in 2015, according to the U.S. Energy Information Administration. In addition, EIA reports that in 2015, almost 88 percent of net electricity generation in Wyoming came from coal and nearly 11 percent came from renewable energy resources, primarily wind.

Tom Darin, senior director for Western state policy at the American Wind Energy Association, said in a statement: “Cutting low-cost wind power out of the Wyoming energy portfolio would be in stark contrast with other states that are saving consumers money by adding wind. And if passed, this bill would also hurt the state’s efforts to diversify its energy economy and generate substantial economic benefits by tapping into its world class wind.”

A spokesperson for PacifiCorp told Renewable Energy World today that the utility opposes the bill as written and is working with the bill sponsors to understand their concerns.

Wyoming’s wind power future lies in exports. Wind resources there already are exported to Utah, Colorado and Oregon, according to the American Council on Renewable Energy.

Wyoming also is home to one of the largest proposed wind farms in the U.S. — the Chokecherry and Sierra Madre wind energy project, a 1,000-turbine wind farm in the southern part of the state. The project, which has reached most of its approval milestones, is currently awaiting a record of decision from the U.S. Fish and Wildlife Service on eagle take permits for the first phase (500 turbines).

The 990-mile HVDC Gateway West transmission line project — one of seven priority projects from the Obama Administration — will move Wyoming wind power resources into Idaho. The Gateway West project received approval from the U.S. Department of the Interior in 2013.

This article was updated on Jan. 19 at 2:10 p.m. with a statement from the American Wind Energy Association.