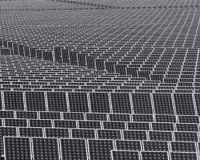 Clark County, Nevada [RenewableEnergyAccess.com] Getting solar photovoltaic modules in the U.S. can be a major challenge, says Jigar Shah, Managing Partner of Maryland-based SunEdison. He should know, too. His company, in partnership with a Nevada-based project integrator, announced construction will soon begin on an 18 MW solar photovoltaic (PV) project that would provide power to a U.S. military base in the Nevada Desert.

This would be, by far, the largest solar PV project in the world, nearly twice as large as PowerLight’s 10 MW project in Germany, currently the largest. This project would also be arranged into one large field, and not split up into multiple sections as in some large projects. SunEdison and Powered by Renewables (PBR) were the finalists in a Nevada Power’s competitive bid for construction of a large, utility-scale solar photovoltaic (PV) project. A state Renewable Portfolio Standard (RPS) requires that Nevada Power source a small percentage of its electricity production from renewable sources like solar energy. Construction is expected to begin in July 2006 with the first 4 MW expected to be in place by year’s end. The project — so large it will take up square miles — will provide power to a military installation in Clark County. The county’s major military fixture is Nellis Air Force base but Shah could not confirm at this time whether this was the military installation slated to receive the power. Shah could confirm they are secure on getting the thousands of solar panels needed for the project at a time when it’s increasingly difficult to do so. With so many solar modules going abroad to Germany where high solar incentives are driving the market, it was not an easy task. He said they have secured module orders from more than one major module manufacture for the first half of all modules needed. “We’ve gotten the MW, we’ve been given assurances but we’ve had to be vigilant about it,” Shah said. “I think modules are a major challenge.” He said module marketing in the U.S. was fairly well disregarded in 2005 and he expects 2006 will be flat as well. Despite a federal tax credit and some progressive state legislation, Shah says all the growth in solar PV will be in Germany, and increasingly in Spain and South Korea where government support for solar is on the rise. Referring to the tight module market in the U.S., Shah added that it would be taxing on both companies selling solar energy systems and on the consumers and businesses seeking to buy them. “The issues going on now will separate the people dedicated in the industry from those who are just looking to burnish their green image. Clearly you have to be committed,” he said. Shah wouldn’t reveal the total value of this large project but suggested other multi-MW projects tend to average somewhere around $6.5 million per MW, or $117 million in the case of this project. There are, however, very few multi-MW projects on a global scale to compare to this. On the finance front, Shah added that too many investors traditionally interested in large wind energy projects are now keen on investing in the solar industry. “There are tremendous dollars in the wind power industry but now a great majority of investors are looking at the solar industry to achieve a higher rate of return,” Shah said. “There’s way too much money chasing wind projects so that investors are now competing over wind projects. A lot of them have already raised funds and want to place them in a tax advantaged way.” This refers to federal tax credits for renewable energy projects such as the Production Tax Credit, which is particularly helpful for wind power projects, and the Investment Tax Credit, which is best applied for large solar projects. Shah emphatically pointed out the importance of having a local company to work with on the project. In this case, it’s Powered by Renewables (PBR), based in Las Vegas. They will primarily deal with any local issues surrounding the construction of the facility. He called it a “big mistake” when companies go into states and work on solar projects without a local partner. PBR will also work with SunEdison on many other projects throughout the state. The project will feature Satcon’s commercial scale inverters, at least half of them being 500 kW units, with 220 kW and 100 kW units making up the rest. The project companies will set up local training operations to provide for the expected and regular maintenance on the inverters.