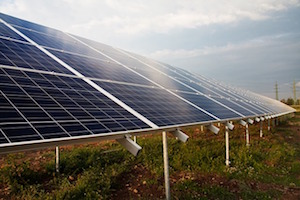 A transformation is happening in global energy markets that’s worth noting as 2016 comes to an end: Solar power, for the first time, is becoming the cheapest form of new electricity.

This has happened in isolated projects in the past: an especially competitive auction in the Middle East, for example, resulting in record-cheap solar costs. But now unsubsidized solar is beginning to outcompete coal and natural gas on a larger scale, and notably, new solar projects in emerging markets are costing less to build than wind projects, according to fresh data from Bloomberg New Energy Finance.

The chart below shows the average cost of new wind and solar from 58 emerging-market economies, including China, India, and Brazil. While solar was bound to fall below wind eventually, given its steeper price declines, few predicted it would happen this soon. 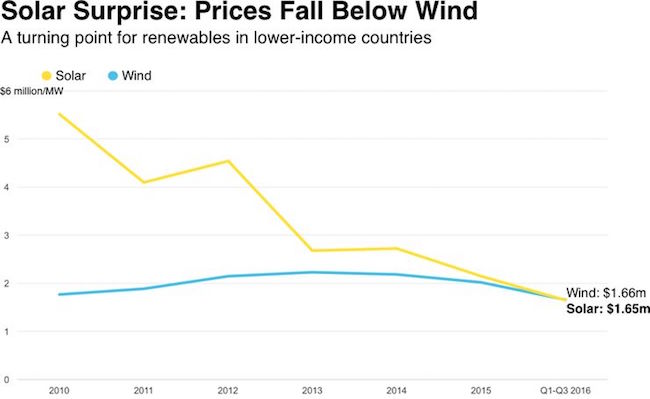 “Solar investment has gone from nothing—literally nothing—like five years ago to quite a lot,” said Ethan Zindler, head of U.S. policy analysis at BNEF. “A huge part of this story is China, which has been rapidly deploying solar” and helping other countries finance their own projects.

Half the Price of Coal

“Renewables are robustly entering the era of undercutting” fossil fuel prices, BNEF chairman Michael Liebreich said in a note to clients this week.

Those are new contracts, but plenty of projects are reaching completion this year, too. When all the 2016 completions are tallied in coming months, it’s likely that the total amount of solar PV added globally will exceed that of wind for the first time. The latest BNEF projections call for 70 GW of newly installed solar in 2016 compared with 59 GW of wind.

The overall shift to clean energy can be more expensive in wealthier nations, where electricity demand is flat or falling and new solar must compete with existing billion-dollar coal and gas plants. But in countries that are adding new electricity capacity as quickly as possible, “renewable energy will beat any other technology in most of the world without subsidies,” said Liebreich.

The world recently passed a turning point and is adding more capacity for clean energy each year than for coal and natural gas combined. Peak fossil-fuel use for electricity may be reached within the next decade.

When it comes to renewable energy investment, emerging markets have taken the lead over the 35 member nations of the Organization for Economic Cooperation & Development (OECD), spending $154.1 billion in 2015 compared with $153.7 billion by those wealthier countries, BNEF said. The growth rates of clean-energy deployment are higher in these emerging-market states, so they are likely to remain the clean energy leaders indefinitely, especially now that three-quarters have established clean-energy targets.

Still, the buildup of wind and solar takes time, and fossil fuels remain the cheapest option for when the wind doesn’t blow and the sun doesn’t shine. Coal and natural gas will continue to play a key role in the alleviation of energy poverty for millions of people in the years to come.

But for populations still relying on expensive kerosene generators, or who have no electricity at all, and for those living in the dangerous smog of thickly populated cities, the shift to renewables and increasingly to solar can’t come soon enough.