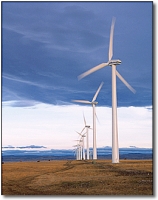 More than 3,000 government, industry and financial leaders are converging in Chicago for the first global wind energy event ever to be held in the U.S., the Global WINDPOWER 2004 Conference and Exhibition taking place this week.

Chicago, Illinois – March 29, 2004 [SolarAccess.com] This large gathering takes place at a key point in the development of the U.S. and global wind industry. The wind energy industry celebrated a near-record breaking year in 2003, adding more than 8,000 megawatts (MW) of wind energy capacity in more than two dozen nations. The new wind sector investment is worth $9 billion, up from $7 billion in 2002. The total world capacity of 39,294 MW provides enough to power the equivalent of 9 million average American homes. Europe and the U.S. dominated the global market in 2003, accounting for 88% of the new installations. India added 408MW (5%), the largest single addition outside the European and the US markets. At the start of 2004, however, the expiration of the wind energy production tax credit in the United States threatened to stall growth in what has been the world’s fastest growing energy source for the past several years. “Wind power has hit the big time; it is a big business and has moved to the mainstream, largely driven by rapid growth in a small handful of countries. The sector is in the midst of global expansion, and the global wind market could reach $150 billion by 2012. The next decade will see a broadening of the global market to cover new countries in Europe and across countries such as Australia, Japan, South America, North Africa, Canada, China, and Brazil”, said Corin Millais, CEO of the European Wind Energy Association (EWEA). “Wind power potential remains grossly untapped in the Asian region,” said Mr Sarvesh Kumar, Chairman of Indian Wind Turbine Manufacturers Association (IWTMA). “In the region’s fast growing economies there is an intense demand for new generation capacity based on clean and green energy sources.” According to Kumar, India is the fifth largest wind power generator in the world and the potential for wind energy in India is around 45,000 MW. It is expected that 10% (10,000 MW) of the proposed addition in energy capacity of 100,000 MW in the next 10 years would come from the renewable energy sector and more predominantly from the wind energy sector. “Wind power has come of age and the next 20 years will see greater and enhanced deployment of wind electric generators as a clean and green source of power generation in India and other Asian countries,” Kumar. “Against adding some 500 MW per year we should be looking at capacity additions of at least 2,000 to 3,000 MW per year. This is possible only if India starts developing a national Renewable Energy legislation immediately.” “The United States now has the second largest installed wind capacity of any nation in the world, but we recognize that clear, consistent policies are the key to extending that record of accomplishment,” explained Randall Swisher, executive director of the American Wind Energy Association (AWEA). “The industry has proven over the past several years that it can ramp up quickly to meet demand, as evidenced by the figures in our first-ever annual industry rankings of wind energy development. With stable policy support, investments would flow on an even larger scale into the U.S. wind energy market.” To provide perspective on the size of the American wind industry, AWEA has issued its first ever annual industry rankings of wind energy development in the United States. The rankings (as of December 31, 2003) include the following: States with most wind energy installed, by capacity (MW) #1 California – 2,043 MW #2 Texas – 1,293 #3 Minnesota – 563 MW #4 Iowa – 471 MW #5 Wyoming – 285 MW Largest wind farms operating the U.S. (MW) # 1 Stateline, Oregon-Washington – 300 MW # 2 King Mountain, Texas – 278 MW # 3 New Mexico Wind Energy Center, New Mexico – 204 MW # 4 Storm Lake, Iowa – 193 MW # 5 Colorado Green, Colorado – 162 MW # 5 High Winds, California – 162 MW Leading owners of wind energy installations in the U.S. (MW): #1 FPL Energy – 2,700 MW #2 Shell Wind Energy – 393 MW #3 AEP – 310 MW #4 PPM Energy – 201 MW Manufacturers that sold most wind turbines in the U.S. in 2003 (MW sold): #1 GE Wind with 51.8% market share #2 Vestas with 21.3% market share #3 Mitsubishi with 11.9% market share #4 NEG Micon with 9.4% market share #5 Gamesa with 3.3% market share Utilities/power companies that buy most wind power (MW purchased) #1 Southern California Edison purchases the output from 1,080 MW of wind power #2 Xcel Energy purchases the output from 829 MW of wind power #3 Pacific Gas & Electric Co. purchases the output from 680 MW of wind power #4 PPM Energy purchases the output from 606 MW of wind power #5 TXU purchases the output from 580 MW