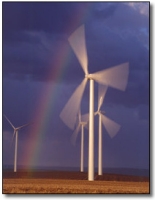 With less than one month until the start of the U.S. wind energy industry’s largest-ever annual meeting, the American Wind Energy Association (AWEA) has announced the speaker lineup for the WINDPOWER 2003 Conference and Exhibition. The event will take place at the Austin Convention Center in Austin, Texas May 18-21, 2003.