A wind turbine blade now under development will set a new record for length, it is claimed.

Full technical specifications have yet to be released but, under a strategic partnership with power group Alstom, LM Wind Power has tested a prototype that it says outstrips the longest blades currently in serial production – LM’s 61.5 metre blades installed at farms including the Beatrice Wind Farm Demonstrator project. 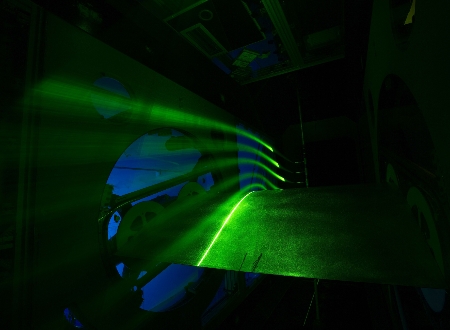 Prototypes of the new blade will be produced in LM’s Danish factory in Lunderskov and will be ready for test installation in the winter of 2011 on Alstom’s6 MW offshore wind turbine. Two prototypes will be installed in 2011 and 2012, followed by a pre-series in 2013 and full series production in 2014.

The blade will also feature LM’s aerodynamic profiles based on its GloBlade, which raises annual production by from 4% to 5% on standard designs, it says.

Next generation tower technology from Wind Tower Systems LLC has been acquired by GE Energy. It is expected to enable taller, cost-efficient towers built with an integrated crane.

The space frame tower system technology is designed to suit wind farm sites with hub heights of 100 metres or more but to be transported on standard flatbed trucks. The integrated Hi Jack crane system technology is designed to substitute heavy lift cranes during installation and the technologies could offer a cost effective means to extend tower heights and thereby raise output.

Plans are underway to install a prototype of the system for validation and testing later this year with commercial availability targeted for 2012.

Gamesa Books in at Zefir

Spanish company Gamesa has requested space to install two offshore and two onshore turbines at the experimental Zefir offshore wind laboratory off the coast of Tarragona, Spain, from the Catalonia Institute for Energy Research (IREC).

Zefir Test Station will eventually have space for 12 turbines but will be developed in two phases. Up to four turbines will initially be anchored to the seabed about3.5 km off the coast with a combined capacity of no more than 20 MW. Up to eight floating turbines with a total capacity of up to 50 MW will then be installed some 20 km from the coast.

Gamesa also has a venture with Newport News Shipbuilding to develop the first offshore prototype of the G11X-5 MW series. In February 2011 the two firms launched the Offshore Wind Technology Center in Chesapeake, Virgina. A team of nearly 50 engineers is developing and testing the G11X-5 MW with a goal of installing one offshore and one onshore prototype for comprehensive validation testing by the fourth quarter of 2012.

A pre-series of the G14X offshore turbine may be market ready in 2014, said Gamesa.

Germany-based SkySails GmbH &amp; Co KG has succeeded in securing an undisclosed investment from DSM Venturing as part of a recent financing round.

SkySails develops wind propulsion systems for the marine industry based on large automated towing kites. Depending on the prevailing wind conditions, a ship’s average annual fuel costs and emissions can be reduced by 10%-35% by the system, says SkySails. Under optimal wind conditions, fuel consumption can temporarily be cut by up to 50%.

DSM Dyneema, SkySails and rope manufacturer Gleistein are to work jointly on developing a special high performance rope required for this type of wind propulsion system. 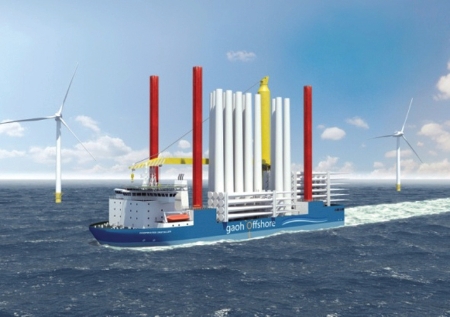 An image of the planned Deepwater Installer (Source: Gaoh Offshore)

The 140 metre long jack-up DP2 Deepwater Installer is to be constructed at the STX Dalian Shipbuilding Complex in China.

Intended to operate year-round in the central North Sea, and to withstand 100-year storm criteria on site, the vessel will handle up to 16, 3.6 MW turbines on each trip. A 1600 tonne crane and under-deck storage should cut the cost of installing, commissioning and maintaining each turbine, its developers say.