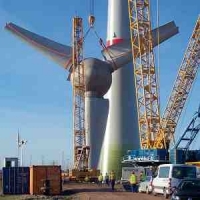 Hannover, Germany [RenewableEnergyWorld.com] The world’s largest annual Hannover Messe industry technology fair took place this year at the end of April in Hannover, Germany. The fair boasted 6,150 exhibitors from 61 different nations and around 210,000 visitors – of these one in four from abroad. South Korea was Hannover Messe Partner Country 2009.

The wind industry presented itself well at the Hannover Messe industry event, where equipment suppliers and service providers alike were mainly concentrated in Hall 27. A simultaneous conference entitled “A World Energy Dialogue” was an integrated two-day parallel event reflecting the growing importance of sustainable energy supply as a global issue affecting everyone.

The mood regarding wind market prospects for the remainder of 2009 can be described as generally optimistic. A pleasant and encouraging surprise was the far more positive market outlook compared to opinions expressed at EWEC 2009, which took place one month earlier. EWEC respondents typically expected a 20 – 25% overall wind market volume decline for 2009. Hannover exhibitors only weeks later quoted growth percentages that ranged between the industry losing 5 – 10% in volume to some surprising estimates of 5 – 10% growth.

Unfortunately wind industry news is not overall positive. Vestas Wind Systems A/S in its 1st quarter 2009 report released on 28 April 2009 announced to lay-off 1,900 of its workers in Denmark and the UK. This is due too “substantial structural excess capacity in Northern Europe” according to the report. It continues: “… The projects that will help Vestas meet its forecast for 2009 are currently only awaiting funding; everything else is in place. Consequently Vestas expects that significant contracts will be signed during the coming months.” In the same report Vestas announced a new version of the 850-kW turbine model with its larger 60-meter rotor diameter in China, which is specifically developed for local low- and medium-wind speed sites.

At a press conference German companies EnwB and Siemens signed a contract for the delivery of twenty-one 2.3-MW Siemens turbines for Germany’s 2010 Baltic I offshore wind farm. Siemens this year commenced with the building of five offshore wind farms in both the UK and Denmark.

Fuhrländer displayed a full-scale model of the its 2.5-MW FL 2500 nacelle, a product development by engineering consultancy W2E based in Rostock, Germany. Apart from Fuhrländer the well-received W100 turbine model is now being produced by eviag AG and Chinese company A-Power while further global production expansion in Montana (US) is planned. In Hannover, aviag announced a major further cooperation with W2E, this time involving a worldwide license for a new 2-MW W93 sister product. A W93 prototype is planned for this autumn, followed by a 0-series in 2010 and serial production start in 2011.

Another new wind industry player that presented itself in Hannover is Delaware (US) based Avantis Group. Its Chinese joint venture partner Guangxi Yinhe Avantis Wind Power Co. Ltd. (GYAW) built the first prototypes of a new IEC WC IIA water-cooled 2.5-MW direct drive turbine model with 93.2-meter rotor diameter, named AV 928. The turbine is fitted with a permanent magnet generator, developed by Avantis spin-off company German Drive Systems, and manufactured by Hyundai Heavy Industries of Korea. The company also developed sister models of 2.3-MW and 3.5-MW (offshore) and during the next few years plans additional production facilities in Europe and the US. 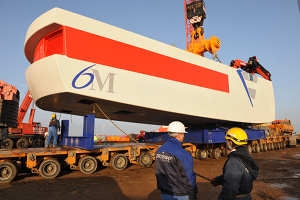 However, in the continuing megawatt race, BARD Engineering has already announced that is plans to scale up its 5-MW offshore turbine to 6.5-MW. Enercon is rumored to be testing an 8-MW version of the E-126 (onshore) giant. The German market leader now manufactures one 6-MW E-126 onshore turbine a month and this number will expand gradually to meet growing international demand, said a company representative in Hannover. (See lead image of the E-126 onshore turbine, above, courtesy Enercon.)

This year Enercon presented itself in a spacious new design booth. A partly open 2-MW E-82 nacelle with characteristic egg-shaped aluminum cover attracted many viewers, while one of the screens displayed details of the Enercon’s revolutionary E-ship fitted with four spinning Enercon-designed cylindrical steel Flettner rotors. The operating principle known as the Magnus effect is named after German physicist, Heinrich Gustav Magnus. Another German physicist Anton Flettner first demonstrated the concept in 1924.

The 130-metre long E-ship is planned to make its maiden voyage by the end of 2009 and will be employed for transporting turbines and components. The E-ship is claimed to achieve a 30 – 40% fuel saving compared to a vessel of the same size with conventional diesel powered propulsion.