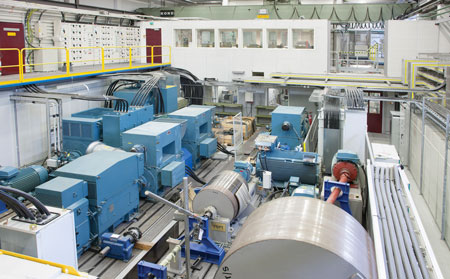 A changing power-generation landscape has led to new challenges for both wind-turbine manufacturers and makers of turbine components. Will a shift toward new technology ensue?

Tests simulate the different kinds of fault conditions that could happen in a real power grid through circuit tests in multiple combinations. Credit: ABB.

In response to the changing nature of power generation and distribution, some manufacturers of utility-scale wind turbines are considering moving away from electrical drivetrains based on doubly-fed induction generators toward those using full-converter technology. This potential paradigm shift could ultimately determine which wind OEMs will dominate in a changing energy market.

Below the OEM level, but working symbiotically toward the same efficiency and profitability goals and subject to the same market factors, are the companies that manufacture and supply wind turbine components. One such firm is Finland’s ABB, which makes both types of drivetrain package. 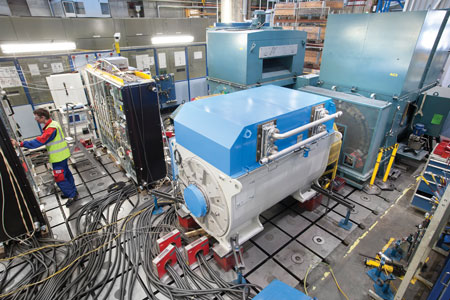 The test setup is self-powering, consuming its losses to drive the motors downstairs that run the testing rigs. Credit: ABB.

On a recent visit to the company’s electrical drivetrain testing facility in Helsinki, Renewable Energy World spoke with ABB staff about how they test the different components, why they need to test them, and what’s in store for the future.

A wind turbine’s electrical drivetrain is composed of the generator, the converter, the transformer, and medium-voltage switchgear. The difference between doubly-fed and full-converter drivetrains lies primarily in the type and size of the generator and that in the full converter type, all the power is fed through the converter. Full-converter drivetrains are offered in low-speed (also called direct-drive), medium-speed, and high-speed versions.

The electrical drivetrain sits between mechanical and electrical forces, said Teijo Kärnä, wind market manager at ABB Finland. It must withstand both types of interactions and also fulfil grid-code compliance requirements at the turbine and power-plant levels.

It is perhaps not surprising, then, that electrical drivetrain components are responsible for one-third of all wind turbine failures, resulting in 37 percent of annual turbine downtime.

According to Kärnä, the high number of failures is due to how the different components within the drivetrain interact with each other. If one component is optimized, how well does it operate with a different supplier’s converter? In other words, he said, failure rates are about how well you can optimize your overall design to maximize reliability and minimize downtime.

While the doubly-fed drivetrain model has traditionally dominated the market, full-converter drivetrains are catching up fast. Drivers for this trend include the need for compliance with new and more demanding grid codes and a growing need to optimize power generation at lower wind speeds. Increasingly, today’s wind turbines need to produce higher-quality output more reliably and be able to help stabilize the grid by feeding in reactive power.

According to Timo Heinonen, content manager at ABB Motors and Generators, the full-converter concept “multiplies all the benefits of the doubly-fed system.”

“It offers a full-speed-range, full-grid compliance with the most advanced grid-fault support and ride-through function, full control of the generator and the grid, and total grid decoupling of mechanical parts,” Heinonen said.

ABB noted that an OEM’s choice of electrical drivetrain will result in different wind turbine weights, sizes, and maintenance needs. Thus, the company cautioned that selecting a drivetrain must be undertaken with care, weighing the turbine’s requirements against the necessary certifications and grid-code specifications.

In addition, because where the turbine will be installed — and thus which grid codes will apply — is not always known ahead of time, sometimes the OEM is forced to estimate, which can lead to extra costs. Testing can eliminate this, the company said.

The Importance of Grid Codes

Grid codes define the technical specifications that a grid-connected power-generating installation has to meet to ensure the safe, secure and economic functioning of a regional or national electricity network.

In Europe, many grid codes have recently been modified to cope with the increasing penetration of renewable energy sources, bringing new challenges for OEMs and component makers.

Kärnä said that in Europe, power-plant operators “are not allowed to disconnect anything [in the event of a grid failure] — the plant must be online at all times and be in a position to support the grid.” And individual wind turbines, he said, can no longer “[operate as] conventional units, but must operate in the same way as a power plant.”

“The OEM is just happy if they are able to comply with the requirements for the turbine,” Kärnä noted.

While a wind turbine can’t comply with all of the grid-code requirements on its own, as these are typically applied at the point of common coupling for an entire wind farm, the quality of the power that the turbine produces is nevertheless increasingly important, as electrical problems such as flicker, harmonic distortion, and fault ride-through will all affect the grid.

In addition, said Kärnä, the challenge for OEMs and component manufacturers is often not to fulfil the grid-code requirements as such, but to understand their intended functionality and the details of the technology requirements, as the grid codes themselves can be moving targets. 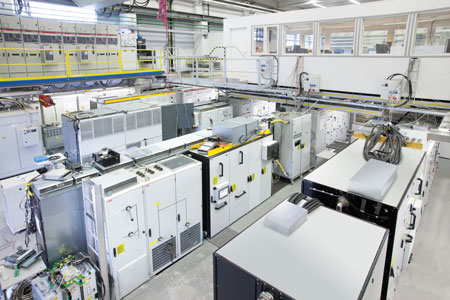 However, Matsinen said, “there have been discussions, specifically in Germany,” in which some OEMs using full-power technology were actively promoting its capability to support the grid under different kinds of fault conditions.

“How the turbine should operate under symmetrical and asymmetrical faults, however, is more or less questionable,” Matsinen said.

“At least so far, the current trend in grid-code development has been that grid support shall always be conducted as a positive sequence current, regardless of the type of fault,” Matsinen said.

Matsinen said the price tag for this grid-code development was that OEMs using doubly-fed drivetrains were suffering because of the advantages offered by the full-power types.

For example, a doubly-fed generator can operate similarly to conventional synchronous generators, but only if the grid-code requirements do not ask for something different.

Today, because of the high penetration of renewable energy on the German grid, instability is increasingly likely. And grid-code requirements are not only about avoiding failures, Matsinen said; they also work to guarantee power quality.

“We need to know how to support the grid to survive under normal load-consumption conditions and how to balance with renewable energy to stabilize it,” Matsinen said.

In terms of coming grid-code developments, ABB has focused its testing where it expects change. As the system monitors grid voltage for faults, if it notes a drop in voltage that might have previously triggered a fault, it will cut out — but under today’s grid codes the voltage can fall as low as zero and still not trigger a fault. Thus, the current concern is with the duration of fault events.

Matsinen said that “the failure modes are more or less there; the voltages cannot go any lower than zero — and now we are already there. The only variable that can be extended is duration.”

Grid codes differ throughout Europe, presenting further problems for OEMs. One of the strictest codes, if not the strictest, is the UK’s, Matsinen said.

ABB has extended its testing even beyond the average range to explore whether the equipment will stand up to failures lasting 500 milliseconds, a number that Matsinen said is “fully compatible with all known international grid codes.”

Significant changes such as China’s revisions to its grid code can mean that OEMs may have to retrofit their previously commissioned turbines, incurring huge costs, in order to comply with the new requirements and take advantage of higher feed-in tariffs.

With ABB components, Matsinen said, these OEMs “can take advantage of our lab-test results and simulation tools beforehand so they really know what to do. For example, in the case of China’s latest grid-code revision, only the converter’s control software needed to be upgraded in order to comply with the requirement.”

Expectations for the Future

Kärnä said he does not particularly prefer one drivetrain concept. “There are advantages and disadvantages with any concept: direct drive, medium speed or high speed.” In the offshore wind market, he said, ABB approaches the issue client-by-client.

“All technologies are equal, but it depends on your perspective — manufacturing, installation, operations and maintenance — all are different flavors. There is still a place for all of these in the market for the foreseeable future,” Kärnä said.

Kärnä said that direct-drive would not become a major concept during the next five years. “Globally, mainly due to the Asian market, doubly-fed will prevail onshore.”

For offshore wind installations, Kärnä said, it will be “PMGs [permanent magnet generators] and induction generators [direct drive or medium-speed].”

And the next step? Beyond PMGs, Kärnä said, the industry should expect not big changes but “further refinements — around dimensioning and magnet materials, but of course also [around] differences in medium-speed, high-speed, and direct-drive — mainly because of the manufacturing processes and technology.”

The challenge for direct-drive turbines is the larger dimensions of all of the components, Kärnä said, especially in terms of where to manufacture them and how to transport them.

“Going up to 8 MW,” Kärnä said, “you have a huge generator manufactured on the shore in the harbor because you can’t transport it anymore.” For this scale of production, he said, “you have to have a sustainable market.”

Looking to the future, Kärnä said which technology will dominate “remains to be seen.” Today, he said, there are around three or four players in Europe’s offshore wind market. “Two have medium-speed, two have direct-drive, and one of those has an option for high-speed… so from that I could not draw any conclusions.”