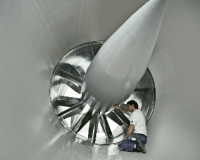 Lunderskov, Denmark [RenewableEnergyAccess.com] The world’s leading wind turbine blade manufacturer, Denmark-based LM Glasfiber, last week inaugurated the world’s first wind tunnel that is custom designed for research and testing of the aerodynamic properties of rotor blades. The of DKK 25 million (US$4.2 million) tunnel is intended to provide new know-how to ensure that tomorrow’s wind turbines can continue to generate more and more power.

“During the past 20 years, we have managed to double the capacity of wind turbines about every four years,” said Helge Sander, the Danish Minister of Science, at a ceremony to inaugurate the facility. “As a result, the price of wind power has been reduced by approximately 80 percent during the same period. This development, Sander said, is best illustrated by LM Glasfiber’s largest rotor blade, which is also the world’s largest at 61.5 meters. A wind turbine with three of these blades is able to generate power sufficient to cover the annual consumption of 5,000 average European households. Ten years ago, four of the most advanced turbines at the time were needed to cover the same power consumption. While wind energy turbines themselves continue a steady and relatively uninterrupted march up in size, wind turbine blades, typically made of fiberglass, are approaching their technological limits. LM Glasfiber acknowledged this reality, saying that wind technology has reached such an advanced stage that decisive new knowledge is required if the company is to continue to achieve similar efficiency improvements. The advanced wind tunnel, they hope, will play a part of squeezing out further efficiency advances. The wind tunnel will give LM Glasfiber’s team of aerodynamic scientists and engineers a world-exclusive opportunity to conduct tests, 24 hours a day, 365 days a year, to develop the optimum aerodynamic blade design. This design consistently balances on a compromise in which the objective is to extract as much power from the wind as possible while at the same time minimizing the load on the wind turbine. The optimum solution cannot be based on theory alone, says the company, it must be tested under conditions identical to those in the real world. This is the kind of tests performed in the new wind tunnel, and its design will allow LM Glasfiber to recreate the operating conditions of the rotor blades with a higher degree of precision than before. “In fact, efficiency is now so high that we have started to operate with margins when we speak of efficiency,” said Frank V. Nielsen, LM Glasfiber’s R&D Director. “But the margins are very important. If our blade design can help boost the annual power production by a mere 2% during its 20-year lifetime, it will generate so much more power that, in financial terms, it will offset the financing cost of the wind turbine. We are confident that our new wind tunnel can contribute with the know-how required for us to achieve this higher efficiency.” Ronald Sunden, CEO of LM Glasfiber, took a frank approach to seeking further efficiency from wind power: “Inexpensive and clean energy is not a utopia,” Sunden said. “Therefore, it is important that we make investments in alternative forms of energy that are as effective as possible. We hope that we at LM Glasfiber will help to lead the way forward in this process.”