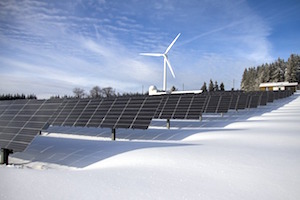 Wind and solar accounted for more than 98 percent of all new U.S. electrical generation placed into service in the first two months of this year, according to a SUN DAY Campaign analysis of data just released by the U.S. Federal Energy Regulatory Commissions (FERC).

FERC data show that 14 new “units” of wind, totaling 1,568 MW, came into service in January and February 2018 along with 40 units of solar (565 MW) for a total of 2,133 MW. Two units of natural gas provided another 40 MW of new capacity. No capacity additions were reported for any other energy sources (i.e., coal, oil, nuclear, hydropower, biomass, geothermal).

Related: US Utility-Scale Solar, Wind Capacity Could Double by 2020