The wind energy perspective on 2009 was probably about as perfect a measure of the entire nation’s experience of the year as any. Like the nation that gave itself over to the incoming administration’s audacity of hope, wind’s year began with “high expectations.”

The nation and the wind industry then watched innovative policies that might have spurred growth and good things get chewed up in the teeth of a bitter contention between the forces of tomorrow and the forces of yesterday. Belief in the possibility of change dissipated. And the nation, along with the wind industry, then spent the balance of the year “buffeted by financial and economic storms…”

Still, as noted in Wind Industry Highlights of 2009, the year-end summary from the American Wind Energy Association (AWEA), important trends emerged, there were major indicators of what will come in better times and the year was not without a list of the top 15 remarkable accomplishments and developments… ::continue::

The 2009 top 15 remarkable accomplishments and developments for wind:

(1) The American Recovery and Reinvestment Act (ARRA) of 2009 made financing new and ongoing projects possible;

(3) Public support for a strong national Renewable Electricity Standard (RES) requiring regulated utilities to obtain 25% of their power from New Energy sources by 2025 held up;

(5) A National Academy of Sciences (NAS) study revealed that conventional sources of electricity generation are really comparable in cost to New Energy when the dangers and damages done by nuclear energy and fossil fuels are included in the calculation;

(6) The U.S. and the rest of the world grew another year wiser about the need to eliminate fossil fuels, improve the health and well-being of the environment and conserve precious water resources, even in power generation;

(8) A team of wind power experts gave the industry a “B” on its progress toward achieving the Department of Energy-set goal for wind of providing 20% of U.S. power by 2030.

(10) Several initiatives from the private and public sectors moved plans for crucial improvements to the national transmission system ahead;

(11) Wind and the Department of the Interior advanced the streamlining of siting;

(13) AWEA membership grew by 1,000 and WindPower 2009 was once again the biggest and fastest growing conference & Exhibition in the country;

(14) The beginning of construction on the first U.S. offshore wind project got closer to a reality;

(15) The small wind for homes and businesses sector of the industry continued to grow. 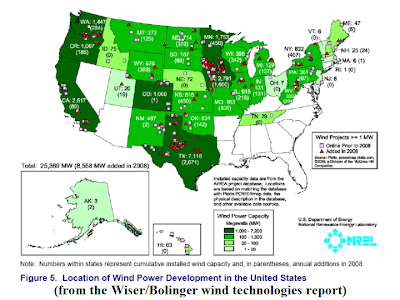 The top 10 trends that emerged and the indicators that will reveal how those trends will develop:

(1) Wind power appears likely to be the nation’s second biggest source of new electricity generation for the 6th year in a row in 2010;

(2) Ongoing public support for the Renewable Electricity Standard (RES) makes it a strong candidate for inclusion in the jobs legislation likely to be put through Congress early this year with uncharacteristically bipartisan support;

(3) As the economy recovers and foreign investors move to take advantage of the riches of ARRA, the U.S. wind turbine and supply chain manufacturing industry could regain its 2008 momentum;

(4) The riches of ARRA and the potential riches in pending energy and climate legislation have set up what could be a brutal competition on Capitol Hill and in public opinion between the Old and New Energies and their proxies, the lobbyists;

(6) Federal regulation of transmission decisions remains highly contentious but states, regions and grid operators are working through their differences and making key decisions and this could lead to big investment in new transmission systems;

(7) As wind becomes an ever-bigger part of electricity generation, grid operators in the U.S., Europe and China are becoming more skilled at effectively integrating it seamlessly into the transmission system, making the use of yet more wind more likely;

(8) The 8-year extension of the uncapped 30% federal Investment Tax Credit for small wind systems for homeowners and small businesses will likely lead to another year of record-breaking growth;

(9) Initiatives involving the Wind Turbine Guidelines Advisory Committee, the U.S. Fish and Wildlife Service and a broad range of stakeholders is expected to result in a streamlined wind project siting process that will facilitate growth; and

(10) AWEA and the industry are also developing stronger and more concrete operational and safety guidelines that should also lend to growth.

On the whole, 2009 was probably most notable for the fact that despite a devastating downturn in the world’s economy and the best efforts of New Energy naysayers, legislative recalcitrants and fossil fuels, nobody seems able to stop wind’s growth. It’s just too useful, safe, clean, environmentally-friendly and affordable a source of big power generation. 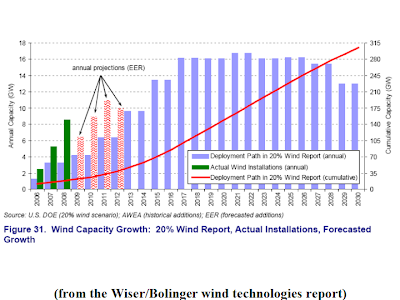 This post is based on American Wind Energy Association (AWEA) Notes Wind Industry Highlights of 2009, Shawna Seldon, December 22, 2009, AWEA. Click thru for more on this and more NewEnergyNews