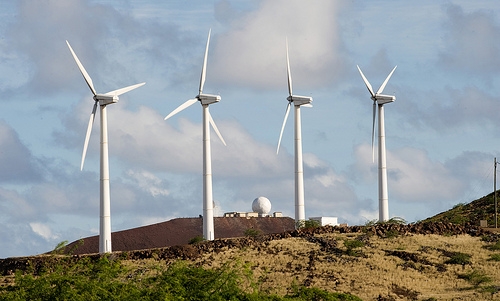 SAO PAULO — Four energy developers agreed to sell power from 10 proposed wind farms in Brazil at the cheapest rates ever.

“This is definitely the cheapest wind energy in the world,” Maria Gabriela da Rocha Oliveira, a Sao Paulo-based analyst with Bloomberg New Energy Finance, said in a telephone interview. It’s 12 percent lower than the August 2011 auction that yielded an average price of 99.58 reais a megawatt-hour. That was the lowest price in the world for wind power then and the least expensive power in Brazil, beating natural gas and hydroelectricity.

A scarcity of contracts in yesterday’s government-organized auction spurred competition and drove down prices, Elbia Melo, executive president of the Sao Paulo-based wind-industry trade group, Associacao Brasileira de Energia Eolica, said in a telephone interview. In Brazil’s power auctions, developers bid down the price they will accept to sell power, and the lowest offer wins.

Renova Energia, Enerfin and EGP may have agreed to low prices because they can attach the additional capacity to existing projects, a strategy that requires less capital than developing a new wind farm, Melo said.

Bioenergy will sell 201.6 megawatts of capacity for 87.77 reais a megawatt-hour, the lowest price of the auction.

“It’s uncertain how Bioenergy will make money at this price,” Melo said. “This fall in prices isn’t indicative of where prices for wind energy is going in Brazil.”

The price is prompting concern that some of the planned wind farms won’t get built.

Last year’s prices “were so low some projects may not be executed,” Joao Paulo Gualberto Silva, commercial manager for Jaragua Do Sul, Brazil-based turbine supplier WEG SA, said in a telephone interview before the auction.

“If lots of projects don’t get built because they’re not profitable, this ends up hurting the wind industry’s credibility,” Silva said.

“Suppliers will both have to provide cheap equipment and invest in new local assembly lines to meet BNDES’s requirements,” she said.

The developers are planning wind farms with total capacity of 281.9 megawatts that will be completed by January 2017.

EDP – Energias de Portugal SA, Portugal’s biggest utility, also sold energy from two large hydroelectric projects with total capacity of 292.4 megawatts in the event, according to the regulator’s statement. The 12 projects will require about 1.1 billion reais in investment.