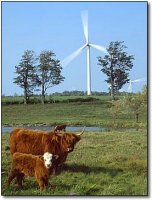 New York state’s power grid will be able to handle up to 3,300 MW of power from future, utility-scale wind farms if proper procedures are followed, according to a preliminary study by GE Energy.

Atlanta, Georgia – March 10, 2004 [SolarAccess.com] The preliminary assessment by GE Energy’s Power Systems Energy Consulting group is the first of a two-phase study of the impact of wind generation on New York’s power system. Such a study is needed before a large number of wind facilities are built. The New York State Energy Research and Development Authority (NYSERDA) and the New York Independent System Operator (NYISO), administrator of the state’s competitive wholesale power market, are sharing the costs of the study. Under its contract, GE Energy’s energy consulting group is assessing how wind generation, at varying capacities and locations, might impact system reliability, transmission planning and operations and power market administration. Issued in February 2004, GE’s preliminary report found that the addition of 3,300 MW of wind power could be absorbed “without significant adverse impacts on the planning, operations and reliability of the bulk power system, provided that appropriate wind farm requirements and operations practices are adopted when needed.” The second and final phase of the study — a more involved system performance evaluation — will further evaluate the impact of wind generation on the planning and operation of the state’s bulk power system. The final report is expected by the end of 2004. Currently, nearly 50 MW of installed wind capacity are located in central and western regions of the state. Gov. George Pataki cited the state’s wind-energy prospects when he asked the state’s Public Service Commission (PSC) to study the potential for at least one quarter of New York’s electricity for retail consumption to be derived from renewable sources by 2013. NYSERDA, through its New York Energy $mart programs, has contributed to the development of renewable energy resources. The authority is cooperating with the PSC in evaluating the steps needed to achieve the governor’s goal. GE’s team was chosen because of its extensive knowledge of the design and operation of electric power systems, familiarity with the power grids of New York state and neighboring areas, as well as knowledge of renewable generation technology and state and federal reliability requirements, said Project Manager Richard Piwko. “We know the system can handle some wind development,” Piwko said. “The big question is how much wind power can New York’s system absorb? What is the threshold level of wind power where existing network operating practices and reliability criteria are no longer applicable?” The unique impacts of wind energy need to be fully understood to protect New York’s power system. For example, while power plants need to plan the amount of electricity delivered at a given time, the supply of wind energy is difficult to predict, due to wind’s fluctuating nature. As a result, GE’s study is evaluating how power plants could compensate for those fluctuations. GE is also examining the impact of wind on the deregulated energy market. One concern is how wind, due to its fluctuations, will be incorporated into the requirement that utilities must have a set percentage of reserve power. The company will then recommend what improvements are necessary to prepare the state’s power system for future wind energy development. For example, GE’s preliminary report found that New York must update its processes for issuing capacity credits, a critical issue affecting the economic feasibility of wind projects. Access: GE Energy