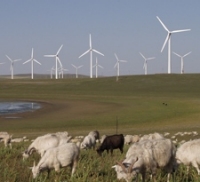 China’s current wind power pricing mechanism, based on a public bidding scheme, needs to be changed to a feed-in-tariff system, experts at Beijing conference on wind power pricing concluded earlier this month. They believe this will help protect investors’ enthusiasm and profit in developing renewable energy.

“The price volatility and uncertainty caused by the current regulation harms foreign and domestic private manufacturers and developers, who are discouraged by a pricing pressure they cannot sustain,” Arthouros Zervos, chairman of the Global Wind Energy Council (GWEC), said at the conference. Relatively high costs and a low electricity price are the major bottlenecks for wind power development in China, according to a study on China’s wind power pricing released in late October by GWEC, the Chinese Renewable Energy Industries Association (CREIA), and Greenpeace. The study says the solution depends on either a reduction in cost or an increase in the electricity price to cover the current cost. Wind power is a new and growing industry that needs support, but the current practice of bidding is in conflict with this aim, the report notes. Investors in Chinese wind power development, meanwhile, are concerned their investments will “go with the wind.” Their dream of washing gold from the nation’s wind resources began in January 2006, when China’s new Renewable Energy Law came into effect, providing a legal framework for the development of renewables in the country. But they experienced a roller coaster ride when the new wind power pricing regulation was announced, shifting from their initial expectation of a high price backed by preferential policies to the reality of low price resulting from the bidding process. “The main reason to continue the concession bidding is to lower the wind power price and protect domestic equipment producers and investors,” says Shi Lishan, director of the Renewable Energy Division in the Energy Bureau of the National Development and Reform Commission (NDRC), the agency that enacted the wind pricing regulations. But this approach has drawn a barrage of criticism from industry players, who fear the practice will lead to low prices that deny investors a reasonable profit. Past bidding did produce several shockingly low bids. “The bidding system is sensible in line with the market rule,” Li Junfeng, secretary-general of CREIA, said. “But many wind power industry players did not make good use of this rule.” By September of 2006, NDRC had organized four rounds of tendering for 11 wind-sourced power projects. Each project was designed to have an installed capacity of more than 100 megawatts. Most of the projects were allocated at a bidding price at 0.4 to 0.5 yuan per kilowatt-hour and went to the country’s big five power companies, including China Huaneng Group and China Guodian Corporation. “The big five power companies are using the profit they made from coal-fired power generation to make up the loss in wind power projects,” said Li Junfeng. But these big five companies, registered as joint ventures, also enjoy preferential tax policies, which helps them earn a refund of 0.1 yuan per kilowatt hour, according to Li. This makes the de facto price for their wind power projects very reasonable. “But it is not fair to other investors, especially the small private ones,” said Li. Critics say any amendments to the pricing policy should focus on creating a fair environment for all investors. In their October report, GWEC, CREIA, and Greenpeace called on the Chinese government to change the tendering mechanism for wind power pricing to a fixed tariff system, which would mean the price is regulated directly by the government. This approach is very successful in Germany and has made that country a global leader in wind power. The report contends that the four bidding rounds so far have established the basis for a shift from a bidding price to a fixed price. Under a fixed tariff system, the authors note, China could be divided into three wind resource categories, with different fixed prices in areas with “rich,” “exploitable,” or “fair” wind resources. The price should be adjusted in a timely fashion, but should always be higher than for coal-fired power, the report states. China has taken great strides in wind power development in recent years. By the end of 2005, it had built 61 wind farms with a power-generating capacity of 1,260 megawatts (MW), ranking it seventh on the list of the world’s major wind players. Last year, the Chinese government lifted its wind power goal for the year 2020 from 20,000 MW to 30,000 MW. The target can be achieved ahead of time if appropriate policies are in place, the October report says. Xiaohua Sun is a reporter with China Daily. This article reprinted with permission of the Worldwatch Institute.