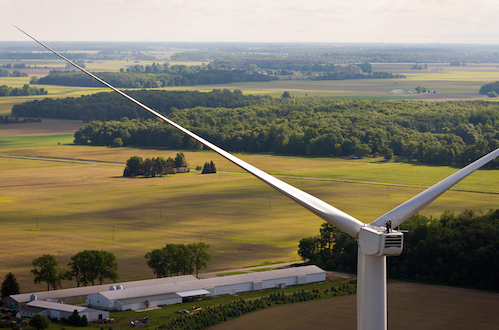 Xcel Energy Inc., the biggest U.S. provider of wind power, expects long-term contracts for the technology to beat the cost of natural gas, another sign of the rapid transformation of the power market.

Xcel, the Minneapolis-based utility that serves eight states, is receiving bids for 20-year power purchase agreements at about $25 a MWh for wind energy, Chief Executive Officer Ben Fowke said in an interview Friday at Bloomberg News headquarters in New York.

While gas prices are close to historic lows, he doesn’t see them remaining there forever, and Xcel expects prices for electricity from the fossil fuel to be closer to $32 a MWh over the same period.

“When we’re buying wind at $25, it’s a hedge against natural gas,” Fowke said. On some of the windiest days, the company’s farms supply as much as 60 percent of the utility’s power. “Wind is becoming pretty close to parity.”

Fowke has plans to add 1,600 MW of wind energy over the next 15 years or so, partly to replace output from two coal-fired units that are being retired at Excel’s Becker, Minnesota, plant. He also expects to exceed requirements in its largest states, Minnesota and Colorado, to get 30 percent of Xcel’s power from renewable resources.

“We have a plan to add significant amounts of wind to our system,” Fowke said, including about 800 MW by 2020. “We’re going to be able to retire coal plants earlier than we expected. It’s going to help us reduce our carbon footprint 60 percent by 2030” in the upper Midwest.