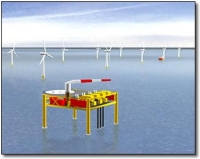 Cumbria, The United Kingdom [RenewableEnergyAccess.com] A UK-based company has formally submitted an application for environmental assessments of what could eventually be the world’s first offshore gas / wind hybrid energy generation project.

Known as the Ormonde project, the project would see the installation of 108 MW of offshore wind power capacity coupled with 98 MW of natural gas generation in an unprecedented effort to provide near constant power delivery from an offshore wind farm. Proposed by Eclipse Energy Company, the plan would generate electricity from the wind turbines during medium to strong winds, but during calm weather conditions or periods of wind turbine shutdown, electricity can still be generated from the gas reserves through an offshore generator platform. This unique coupling is designed so as to provide flexible output of electricity to meet the needs of National Grid while mitigating the intermittency of wind power resources. “Successful deployment of the hybrid concept in this high growth sector will represent a global ‘first’, demonstrating the commercial viability of utilizing hydrocarbon reserves as a catalyst to develop cost- efficient, low carbon, distributed power generation in the offshore environment,” said the company. The application process which included the submission of the Environmental Statement, Field Development Programme and Production Operator Application is expected to take between six and nine months, at which point Eclipse should then be given full approval to develop the Ormonde Project. The Ormonde Project would be located 10km west of Barrow-in-Furness, Cumbria. Eclipse Energy operates the undeveloped Ormonde North and South gas fields located in the region. When constructed Ormonde is expected to have the ability to provide up to 200 MW of electricity from both gas turbines and the wind turbines. The project anticipates first energy in 2007. “Eclipse has combined UK North Sea oil and gas experience and business models to provide a commercial catalyst for offshore wind energy development,” said Ian Hatton, Managing Director of Eclipse. “We expect Ormonde to be the first of a series of similar developments where offshore wind energy is commercialised in this way. Our concept has the potential to make a significant contribution to the future energy production mix of the UK which is in transition from a period of self- sufficiency courtesy of North Sea oil and gas to one where future needs will be met largely by imported energy.”