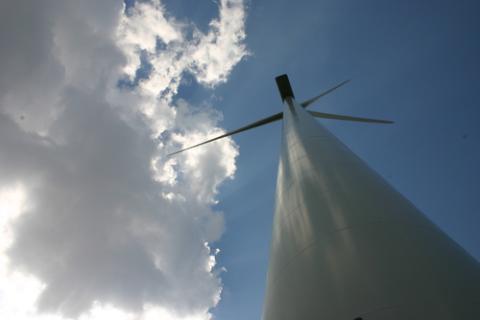 Vestas Wind Systems A/S rose to its highest in more than three years after unexpectedly posting a profit in the first quarter, building on a turnaround that the world’s biggest wind-turbine maker completed last year.

Vestas had net income of 2 million euros ($2.8 million) in the first three months of the year after losing 151 million euros during the same period a year ago. That compares with the average forecast of seven analysts surveyed by Bloomberg for a net loss of 17.1 million euros.

The manufacturer snapped nine straight losses last quarter after cutting almost a third of its workforce and selling or closing 12 of its factories to eliminate 484 million euros in fixed costs. Revenue rose 17 percent to 1.28 billion euros. The shares rose as much as 8.5 percent in Copenhagen.

“To become predictable and stable is the aim,” Chief Executive Officer Anders Runevad, who took over from Ditlev Engel in September, said in a phone interview today. “That’s also why we work on being more flexible. You have to recognize the fact that the market we are in is a volatile market.”

Competitors including Nordex SE and Gamesa Corp. Tecnologica SA are also rebounding. Germany’s Nordex returned to an annual profit last year after two consecutive losses, while Spain’s Gamesa returned to profit after posting its first annual loss as a public company in 2012. Those companies’ shares have both more than doubled in the past year.

Gamesa late yesterday also beat analysts’ forecasts, with its first-quarter profit more than doubling. The company’s shares today rose as much as 4.8 percent in Madrid.

Vestas reiterated forecasts made in February for revenue of at least 6 billion euros in 2014, a margin on earnings before interest, taxes and special items of at least 5 percent and a minimum of 300 million euros of free cash flow.

Runevad declined to be drawn on whether Vestas is likely this year to pay out its first dividend since 2003, saying only that “it’s up to the board to assess.”

In its annual report in February, Vestas signaled a “general intention” in the future to recommend a dividend of 25 percent to 30 percent of the year’s net result, so long as targets for net debt and solvency are met. It also takes into account “growth and liquidity requirements.” Runevad said he has “no plans” to grow through acquisitions.

“Of course we monitor the markets to see what is happening, but we have no plans in that respect,” Runevad said today on a conference call with analysts when asked for his stance on “acquisitive growth.”

The stock increased fivefold in 2013 and is up another 64 percent this year, even after the company on Feb. 4 sold an additional 20.4 million shares, equivalent to almost 10 percent of existing stock.

The company has also extended its loan facilities in February, and will see “how the market looks” when it comes to refinancing 600 million euros of bonds and 275 million of loans that fall due early next year, Runevad said.

“We did a big new banking agreement on the back of the capital increase and we are happy with the strong financial situation we have,” the CEO said.

The quarter “showed improvements in all major areas,” Runevad said in the statement. “This is a result of a lot of hard work from my colleagues, and we remain focused on executing on our strategy.”

Runevad also declined to comment on the possibility of the company’s joint venture into offshore wind with Mitsubishi Heavy Industries Ltd. opening a factory in the U.K., the biggest market for turbines at sea. The venture began operations on April 1, and owns the technology for Vestas’s V164 8-megawatt offshore machine.

Vestas will consider partnerships in China as it seeks to expand in a country that accounted for almost half of all new wind-power installations last year.

“I consider it a good tool in the toolkit,” Chris Beaufait, president of the company’s Asia-Pacific and China business, said yesterday in an interview in Sydney when asked about ventures with other companies, adding that Vestas isn’t currently holding any talks.

Foreign manufacturers have struggled to grab market share in China due to low prices and competition from domestic companies.

“The last two years the company has been focused on getting costs out,” said Beaufait, who is based in Beijing and worked on mergers, acquisitions and partnerships at General Electric Co. before joining Vestas last month. “Now we’re repositioned to be able to grow, and this is exactly the right time to go do what we’re trying to do in the China market.”

Aarhus, Denmark-based Vestas was the 11th-largest supplier of wind equipment in China in 2013 and the top foreign company, according to the Chinese Wind Energy Equipment Association. Xinjiang Goldwind Science & Technology Co. was the biggest.

“We’re the most successful Western wind manufacturer in China,” Beaufait said. “But it’s not something I would be happy about, nor the board, in terms of market size and our participation, so that’s where a lot of our focus will be.”

Vestas today posted an unexpected profit in the first quarter. The company delivered 6 megawatts of turbines to the Asia-Pacific region, which accounted for 11 percent of revenue in the period. Vestas announced no new orders in the Asia- Pacific region in the first three months of the year.

“We have a small market share in a very big market and we are putting steps in place to improve on that,” Chief Executive Officer Anders Runevad said today in a telephone interview, referring to China. “We will not hunt market share without profitability, so we will have to work on operational excellence so that we get cost out to get more relevant in the market.”

Customers in China are concentrating more on reliability and operating projects efficiently, an opportunity for Vestas, Beaufait said. The company plans to “reposition our products” in China and India to try to boost market share, he said, without offering specifics.

Wind-power installations will climb to a record this year, driven by resurgent U.S. demand and growth in developing nations from Brazil to China, the Global Wind Energy Council said in an April 9 report.

China’s target of reaching 200 gigawatts of installed capacity by the end of 2020, up from 91 gigawatts now, implies an annual market of 15.5 gigawatts a year, a goal they’re “likely to exceed,” the wind energy council said in the report.