Last year we discussed where our industry fits in the arc of human progress. This year I’d like to talk about opportunity, and also about conquering our fears.

Last year was about setting the course. This year is about staying that course. I said that we are on the right side of history, and that we were moving into a bold future, where wind continues to compete on price.

It took courage, and I’m here today to tell you we need to stay the course. The last 12 record-breaking months have proved we’re delivering on that fundamental proposition and our vision of low-cost power to consumers.

However, our success has attracted some detractors, who now want politicians to take that grand bargain we made. But the detractors want to focus on fear as a tactic. We have a successful strategy, they just have tactics. The tactic is to rattle the cage about repealing the PTC. Too many in this industry have convinced themselves that they should be afraid of what will happen in the next five years.

The fact is, everybody’s afraid before the ball tips. Fear is fine. It’s a necessary part of winning. But don’t let fear distract you. Don’t let your opponents’ tactics distract, instead of executing your strategy. To put it simply, too many people in this room are spending too much time worrying about what politicians are going to do to us. 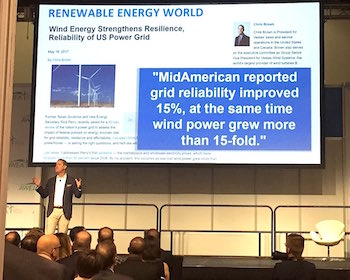 So it’s fitting that we’re meeting in California, where entrepreneurs have used technology and visionary thinking to succeed and innovate. Every one of the global success stories that have come from this state were executed by people who felt that fear — but guess what, they executed anyway. So along with this success we’ve been having, if you’ve become afraid, then I say, “Good.”

Welcome to life as an energy industry disrupter.

Of course, we have critics both in government and in the incumbent sectors they promote. They are trying to rely on ideology and magical thinking to argue against our ability to continue winning. They want us to begin doubting instead of believing in our future and having confidence in our strategies.

Let me tell you a couple things that I believe in:

First, I believe in power costs continuing to drop as wind energy grows.

Second, I believe in the grid becoming more stable as wind energy grows.

Third, I believe that wind is a significant industry in rural and Rust Belt economies in America.

Fourth, I believe in wind delivering value for utilities and major corporate customers.

Let’s stop and think for a minute. That’s a four-part list that the competition is afraid of. Critics criticize. We all know that. It’s what they do when they want to distract you with – their criticism.

Ask yourselves: Why are those critics paying attention to us? Because we’re a threat!

Because we’re winning. Because they know we’re driving into a future in which:

So, if some in government want to find a more efficient way to have an energy model, I’m all in.

And if we’re going to focus on the market, let’s agree on just a couple of principles:

Third, let’s figure how to work environmental state and federal policies together, to complement each other.

Finally, let’s face the reality: Wind does not affect reliability.

But here’s my challenge to you: Don’t be distracted by fear. 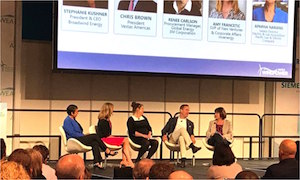 Seize the opportunity that our success has created: Stay focused on the vision that we set for our industry.

I’m not afraid of competition, because I know it’s a team sport.

Look at the unstoppable teams that this industry has created for the next evolution of our industry: Abel, Fehrman, and Budler… Alonzo and Cague… Garland and Armistead… Gaynor, Alvarez, Keel, Spiliotis… O’Sullivan, Di Donato, Gildea… Grimbert, Pfaff, Ghilardi, Del Rio…

Great leaders are driven by partnerships. That means we can compete and win.

It’s the reason why we’ve won key utilities as champions, such as Xcel Energy.

Xcel, with Ben Fowke, is at the top of one of our industry champions. He coined the phrase “wind is on sale” and under his guidance they’ve “backed the truck up” to buy wind, as Ben likes to say.

I want to close with one last reminder.

I’ve been honored to be your chairman for the last 12 months, and I’m here to support Tristan Grimbert going forward.

But I’m not going anywhere.

This industry is just getting started.

The next five years are going to be the best we’ve ever seen.