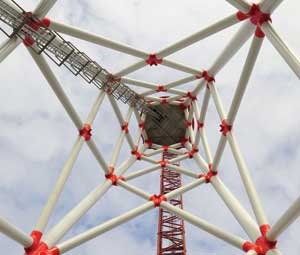 The custom-designed future plant – with close access to an existing deep-water quay – will cost €50 million and is located at the Luneort Bremerhaven, Zentrum für Offshore-Windenergie. The modern facility is expected to become fully operational in 2010.

Once the plant becomes fully operational, WeserWind will be capable of the cost-effective series manufacture of different offshore substructures in two parallel moving line processes. Because individual substructure masses are in the range of 800–1000+ tonnes, a rail system with special vehicles moving the heavy components inside the plant has been incorporated within the overall concept. The heavy equipment transport rail technology closely resembles similar internal transport systems that are common at shipyards, says WeserWind’s head of R&D René Surma. ‘Depending on substructure type and manufacturing method, the units will be moved in either a horizontal or in an upright position. Apart from 65,000m2 of new manufacturing space, we have planned an additional 140,000m2 storage area at two Bremerhaven locations not far from the production site. About half of the total available space is for storing completed Tripods, while the other half offers sufficient storage capacity for both Jacket substructures and Tripile transition pieces,’ says Surma.

Adequate storage space is necessary as a buffer due to the fact that substructure and transition piece manufacture is a continuous, year round process. In contrast, cumulative annual offshore equipment installation opportunities are typically limited to about 120 days over the course of a year. 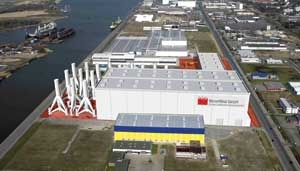 Currently, WeserWind employs more than 250 staff, but according to the company’s future projections, this figure will increase rapidly to over 300 persons by 2012. The current product portfolio includes three different substructure models, including Multibrid M5000 Tripods, Jackets for the REpower 5M/6M, and Tripile transition pieces for BARD Engineering.

WeserWind is part of Germany’s huge Georgsmarienhütte steel processing industrial group, which comprises more than 50 medium-sized businesses located in Germany, Belgium and Austria. By the end of 2008 the group employed 10,200 staff and achieved a €3.3 billion turnover in the last financial year. Georgsmarienhütte itself has its origin in a steel mill and was founded back in 1835. Today’s group of steel processing businesses rank third or fourth in Germany in terms of size and turnover. The wide range of diversified steel-related business activities includes steel mills, steel processing and forging – for instance producing engine crankshafts and locomotive wheels. With regard to wind power, Surma claims that almost every wind turbine manufactured in the world today contains at least one component made by a Georgsmarienhütte subsidiary company.

Nonetheless, the manufacturing of a wind measuring mast in 2004, for the planned German North Sea wind farm Amrumbank West, marked the Group’s formal entry into the offshore wind industry. WeserWind was established in 2002 and today has manufacturing facilities in the German ports of Wilhelmshaven, Rostock and Bremerhaven. A fourth facility is located in Osnabrück, in Lower Saxony, while company R&D activities are concentrated in Bremerhaven.

During recent years WeserWind has completed a series of major offshore wind contracts and examples include the manufacture of initially two, and more recently an additional six, technical units for MULTIBRID. These technical units are fitted between Multibrid tripod substructures and the top head (tower+nacelle+rotor). The initial two units were for MULTIBRID’s land prototypes erected in 2008, while the latter six turbines will be erected this year in the 60 MW Alpha Ventus offshore project in Germany. The impressive yellow and grey-coated technical units themselves feature boat-landing add-ons, climbing ladders and a circular service platform with an access door. Inside, the technical units accommodate an advanced air quality processing system and power electronics, among other systems.

In addition, WeserWind manufactured the offshore high voltage station (OHVS) for Alpha Ventus, and has received additional orders for the period until 2010. The company views the OHVS equipment market as one of potential high growth, and wants to become a dedicated turnkey supplier of these stations. A typical OHVS is characterized by its relative technical complexity and favourable added value content.

Another rather complex product to manufacture is the lattice-type VARIOBASE Jacket® substructure developed in close co-operation with REpower. In early 2008 REpower erected a 5M land prototype in Bremerhaven that was put on top of a steel hybrid tower as a genuine wind industry novelty. This structure comprises a VARIOBASE lattice-type bottom section, with a tubular steel section put on top. Furthermore, in 2004, WeserWind delivered steel frame sections for the Swedish 110 MW 48 turbine Lillgrund offshore wind project, characterized by the application of gravity-based concrete foundations.

For the majority of today’s operational offshore wind farms, steel monopile foundations have been applied, while a minority have been erected on gravity-based concrete foundations. In water depths of up to about 20 metres a monopile proves the most economic solution, explains Surma. ‘The break-even point, whereby alternative solutions become economically attractive as a rule, is reached earlier with increasing substructure size,’ he says.

Manufacturing complex, very large, substructures with individual component masses in the range of 800–1200 tonnes requires custom developed facilities, highly qualified staff and advanced production methods. In addition, manufacturing in western European countries such as Germany requires a clever cost-effective product design, advanced materials processing and a high degree of production automation. Surma adds: ‘The VARIOBASE Jacket® substructure developed in close co-operation with REpower is a good example of, in our view, essential integral design approach. This Jacket is meant to become a semi-standard offshore substructure solution for REpower deepwater projects involving the 5M and/or 6M. In order to find an optimized solution we compared several alternative jacket-type solutions. A four-legged substructure proved superior in terms of cost-effectiveness and overall performance.’

For this specific product design WeserWind developed a series of three different cast steel nodes aimed at optimizing the manufacturing process and driving down component costs. ‘Conventional nodes in a lattice type structure are normally highly stressed areas, as this is where multiple pipes (or other structural elements) join together. An additional issue in welded structures is that substantial amounts of heat are applied during the welding process. That in turn can cause high local material stress levels and component distortion. With the choice of cast steel nodes WeserWind managed to effectively eliminate a number of these traditional manufacturing issues. Each of the three different types of node has a specific function and corresponding shape. These special components share a common feature – up to six large diameter thin-walled pipe sections stick out from a more or less central point at different pre-defined angles and directions. A specific model of node located at each of the four flat tapering sides is named the ‘X-Node’ in reference to the ‘X’ shape of the component. The second model positioned at each of the four corners is known as the ‘Double-K-Node’. The third and final model is located at the substructure top and named the ‘Double-Y-Node’. The latter is applied to make a firm connection with the transition piece on top, which in turn has an integrated flange for bolting on the top head.

Surma observed: ‘The application of cast nodes allows the application of standard tubular steel pipes, and the combination represents a major manufacturing and cost-saving advantage. The steel pipes are joined to specific nodes by means of a robotized welding process. Another key advantage is that heat brought in as part of the welding process is distributed over a much wider area, which substantially adds to overall product quality due to greatly reduced material distortion. The total mass of our 5 MW VARIOBASE Jacket® for a 30-metre water depth application at Alpha Ventus is [at] 730 tonnes (including foundation piles) also very favourable.’

Surma explains that casting low-carbon steel with a carbon content of around 0.25% by weight is far more complex than making a similar component in cast iron with a carbon content of 2.1%–4% by weight. A major materials/physics reason is that the favourable melting temperature of cast iron is ‘only’ 1150–1200°C, while the material is also known for its excellent fluidity characteristics. Pure iron by comparison melts at about 1510°C, while steel typically melts at around 1370°C.

One of WeserWind’s other projects has been the development of a so-called Best-Fit-System for the Tripod substructure final assembly. A ready-made 40-metre high offshore Tripod, again for the 30-metre water depth application at Alpha Ventus, weighs about 1000 tonnes including foundation piles. For the manufacturing process, cylindrical and coning tubular steel sections, with wall thicknesses up to 90 mm, are being applied. Surma says: ‘Already during the Tripod design process, solutions specifically aimed at cost-effective high-quality series manufacture had to be developed and pre-tested. This process resulted in new time-saving component handling and positioning techniques becoming available, and the introduction of automated welding operations.’

The Best-Fit-System for optimized component matching also incorporates advanced control systems. The method was executed and validated for the first time at MULTIBRID’s second M5000 Bremerhaven onshore prototype, which was put on a WeserWind-designed Tripod late 2006 as another wind industry novelty. The Best-Fit-System analysis is based on the application of advanced mathematical algorithms in order to achieve an optimized match between fitting component pairs, for instance with regard to minimizing welding surface manufacturing tolerances. WeserWind applied the experience gained with the Bremerhaven prototype to further optimize its offshore Tripod substructure design. It is also clear that, compared to this land-based Tripod, an offshore substructure is much more heavily built due to its simultaneous exposure to wind, currents and wave loads.

A third new technology WeserWind is working on, which is known as Electronic Beam Welding, enables the welding of 100 mm thick metal sheets in one pass. Commenting on this novel technology, Surma says: ‘This is a highly important development in our business field and so far we have successfully completed some samples. But in two to three years time we hope to get GL-approval for applying this method for welding marine steel structures. In general, we will continue to invest in a variety of future oriented applications all aimed at optimizing manufacturing processes with a focus [on] producing product series. That spectrum includes, for instance, intelligent manufacturing control and ultrasonic component examinations, hopefully replacing X-rays, but also among others steel corrosion protection based upon biochemical processes.’ 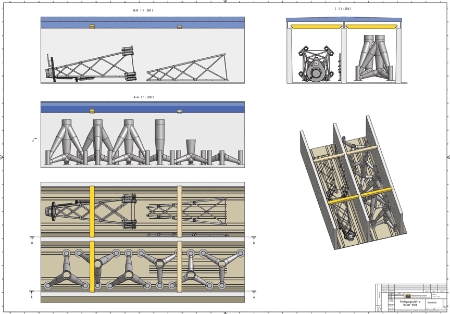 ‘Innovation is a continuous process,’ concludes Surma, saying: ‘since 2004, WeserWind has completed 15 R&D projects. The in-house product and process development team has, this spring, been reinforced by an advanced calculations department. This major expansion in engineering capabilities positions us even better for the huge challenges we will face – especially now Germany’s North Sea wind power development is finally getting out of the starting blocks.’