LONDON — Worldwide wind capacity reached 254 GW by the end of June 2012, according to the World Wind Energy Association’s (WWEA) latest figures. Some 16.5 GW were added between January and June, representing an increase of 10% less than in the first half of 2011, when close to 18.5 GW were added.

Still the five leading countries, China, the US, Germany, Spain and India together represent a total share of 74% of the global wind capacity.

The top 10 markets showed a diverse picture in the first half of 2012. While five countries performed stronger than in 2011 (the US, Germany, Italy, France and the UK), India had a stable market and four countries saw a decrease (China, Spain, Canada and Portugal).

Again in 2012, China represents by far the largest wind market, adding 5.4 GW in six months. However, this is significantly less than in the previous year, when it added 8 GW. China accounted for 32% of the world market for new wind turbines, well down on the 43% in the full year 2011. By June 2012, China had an overall installed capacity of around 67.7 GW and without doubt it will continue to maintain its number one position in the foreseeable future, albeit at a lower speed.

India added 1471 MW, a similar amount to that seen in the first half of 2011. Future prospects for the Indian market are blurring due to outstanding payments for wind generators in some parts of the country and the recent decisions to abolish important support schemes for the sector. 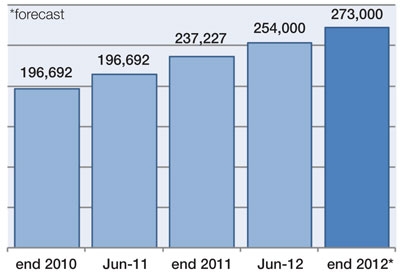 The US and Canada

Major uncertainties arise from the unclear situation about the future of the Production Tax Credit. Several companies have already reduced staffing levels, and the near future of the US wind market may not be very bright. Canada installed 246 MW during the first half of 2012, less than in the equivalent period of 2011.

The two biggest Latin American markets, Brazil and Mexico, had modest growth rates but still above the global average. Brazil increased its installed capacity from 1425 MW to 1543 MW, and Mexico from 929 MW to 1002 MW. Both countries are expected to continue as the leading markets in the region in the next years.

Very encouraging developments happened in Australia where the wind market installed an additional 384 MW, equaling a 17% growth in comparison with 2011.

In the second half of 2012, an additional capacity of 19 GW is expected to be erected worldwide, which would bring new annual installations to 35,546 MW, significantly less that the 40,535 MW of 2011. Total installed wind capacity is expected to reach 273 GW by the end of this year.