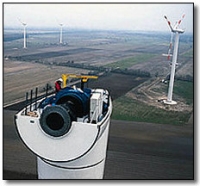 FPL Energy has unveiled plans to build, own and operate what it says will be the largest wind project in Wyoming. The company plans to construct 80 1.8 MW wind turbines at a site in Uinta County, approximately 10 miles northeast of Evanston in southwestern Wyoming. The turbines will have a total peak generating capacity of 144 MW, providing enough electricity to power more than 43,000 homes.

Juno Beach, Florida – July 28, 2003 [SolarAccess.com] “The Wyoming project represents another important milestone in the disciplined growth of our wind portfolio,” said Jim Robo, president of FPL Energy. “This project will bring a significant new source of clean, renewable power to the region.” The company said the output from the facility is fully contracted on a long-term basis. Construction of the project will begin later this year and is expected to be completed by the end of 2003. The project was developed by Orion Energy LLC of Oakland, California. “We are pleased to have completed our second transaction this year with FPL Energy,” said Reid Buckley, vice president of Orion Energy LLC. “This project, which more than doubles Wyoming’s wind generating capacity, has been made possible through the support of the state of Wyoming, Uinta County, the Bureau of Land Management and local landowners.” In addition, FPL Energy announced a 16 MW expansion of the High Winds Energy Center located in Solano County, California, bringing the total capacity of the facility to 162 MW. The output from the High Winds Energy Center will be sold to PPM Energy, under a long-term contract. Construction of the additional 16 megawatts will begin later this summer and will be completed by the end of 2003. With the addition of the Wyoming project and the High Winds expansion, FPL Energy has announced wind projects representing more than 835 MW that are expected to be operational by the end of 2003. “Through a combination of new development and acquisition, we have expanded our industry leading wind portfolio and profitably grown our business. We will continue to utilize a disciplined approach as we explore new opportunities for wind energy development across the U.S.,” Robo said.