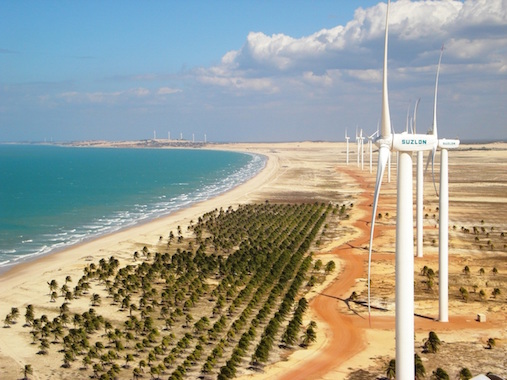 In 2014, annual global installed wind energy capacity reached an unprecedented 51.4 GW. Although final numbers for 2015 aren’t in yet, several sources, including Bloomberg and FTI Consulting, speculate that number could reach as high as 60 GW – an encouraging surge that gives fair indication 2016 could shape up to be another record year for wind. Here’s a look ahead at what 2016 has in store for wind energy across the globe, according to the experts.

The U.S. renewable energy industry got an early Christmas present on December 18 when Congress voted to extend the wind energy Production Tax Credit (PTC) and Investment Tax Credit (ITC). It is an announcement that bodes well for an industry that now boasts more than 70 GW of installed capacity.

Amaury Laporte, Communications Director for the Environmental and Energy Study Institute (EESI), called this “a huge deal for wind power” and said the extension of the PTC alone will likely result in “the installation of almost twice as much wind capacity in the U.S. as would otherwise have been the case between 2016 and 2020.” Laporte added that the extensions may actually result in less wind capacity coming online in 2016, due to the five-year extension giving developers more time to start projects. 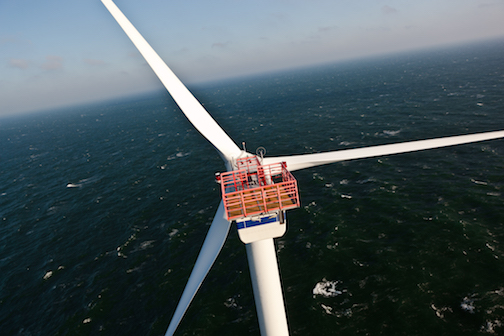 Steve Sawyer, Secretary General for the Global Wind Energy Council (GWEC), said the U.S. wind energy market may be “a little subdued” in 2016 due to the fact tax extensions were not resolved until the eleventh hour. Despite that, he remains optimistic for a “substantial market” in the coming year.

2016 will see the official launch of operations for the Block Island Wind Farm, a 30MW installation off the coast of Rhode Island. Despite its relatively modest capacity of 30MW, Sawyer calls it a good start that will lead to further offshore development, although cost will remain a limiting factor in its early stages.

“The price differential between offshore wind and conventional generation is still very large, and will be until there’s some scale,” Sawyer said. “It’s going to be awhile before the costs come down enough to make it attractive.”

Song Cheng, Head of Markets and Strategic Planning at Siemens Wind Power and Renewables Division, said it will remain a challenge to establish offshore wind power in the U.S. despite its vast natural resources. “A long-term stable supportive scheme for offshore is still missing,” Cheng said, noting a current shortage of expertise and suppliers in the U.S. offshore market.

Keith Martin of Chadbourne & Parke said he believes more developers will choose the PTC over the ITC, primarily because the latter may be “of more interest to offshore wind projects and to projects with large batteries than to most onshore wind farms.”

The U.S. Department of Energy’s Wind Vision report states the United States may be able to meet 10 percent of its electricity needs through wind power by 2020. The report also predicts meeting 20 percent need by 2030, and 35 percent by 2050.

2014 saw Asia overtake Europe as the region with the most installed wind power capacity. Much of that achievement was owed largely to China, which installed 23 GW of capacity in 2014. Early estimates indicate China may have installed 25 GW in 2015.

Sawyer predicts China will continue to dominate the world wind energy market in 2016. “China is looking at a market of about 25 GW per year for the next five years at least,” Sawyer said, adding the country is on track to blast past its 2020 target of 200 GW of installed wind capacity to an estimated 250 GW. China’s offshore-specific target is 30 GW by 2020.

Elsewhere in Asia, Sawyer said projects under construction in Mongolia could result in “a huge export market for direct transmission” for a comparatively tiny domestic market. Sawyer said construction of the first commercial wind farms in Indonesia will also take place within the next year, adding that progress in Pakistan, Thailand, and the Philippines should help cement Asia’s global lead.

“The big prize in southeast Asia is Vietnam,” Sawyer said, where discussions on revising the feed-in-tariff have been taking place for over a year. “We are hopeful something will break in mid-2016 in Vietnam, leading to a flock of investors moving in.”

Sawyer said the nature of Vietnam’s centrally-commanded economy, which has had direct control over the country’s electricity systems for decades, has resulted in wind power progress taking longer than expected.

In Japan, experimental floating wind turbines off the coast of Fukishima will attempt to offset the high costs incurred from the shutdown of nuclear power plants and the country’s subsequent increase in the importation of foreign oil.

In 2015, India announced plans to increase its renewable energy output to 175 GW by the year 2022, with 60 GW coming from wind power alone. Sawyer called this a “very ambitious target” set by a government eager to overcome an antiquated electricity system in dramatic need of reform, adding that its success will rely heavily on “a lot of investment in its dysfunctional market structure.”

Sawyer indicated many of the issues facing India are parallel to those facing the United States, where the federal government has some say, but actual implementation of energy policy is governed by the individual states. Sawyer also cited “bankrupt state-owned local utilities and an aging, decrepit transmission system” as challenges India will have to work to overcome in 2016 to reach its stated renewable energy objective.

Europe: Steady as She Goes

Although no longer the number one wind market in the world with respect to annual capacity added, Europe is expected to remain on steady course throughout 2016. The dominating country in Europe is Germany, which installed 2 GW of offshore wind power in the first half of 2015 alone. Sawyer said Germany will continue its dominance into 2016 in both onshore and offshore wind.

“The biggest wildcard in Europe is the UK,” Sawyer said, indicating a rising level of pushback against governmental resistance to onshore wind turbines in favor of offshore development. Sawyer said existing targets for installed wind capacity in the UK will likely result in little fluctuation in that market between now and 2020, adding, “What happens after that is another question altogether.”

Elsewhere, Sawyer said Poland and Turkey are “the strongest growth markets next to Germany.”

“Offshore is fascinating. There is a floating offshore test project in Scotland using big 7MW Siemens machines. Large floating vertical column of steel ¾ full of water and 9/10 submerged and anchored off the coast of Norway about 5 years ago. We forget these foundations do move with the weather, even onshore, and offshore they move but not very much and slower than they move onshore.” 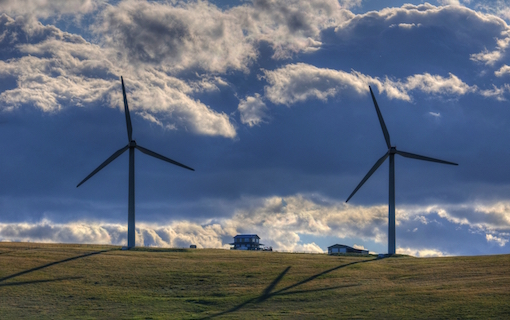 Movement in the Great White North

According to the Canadian Wind Energy Association (CANWEA), 2015 was a transformative year for the Great White North. Surpassing the 10 GW installed capacity threshold, Canada pushed its way to seventh place in the global race.

Canada now supplies four percent of its electricity usage through wind power, and recently announced renewables targets in Alberta and Saskatchewan — 30 percent and 50 percent by 2030, respectively — bode well for increased investment into wind energy in 2016.

In Mexico, the solar and wind markets have experienced dramatic growth over the past decade; the country’s Energy Transition Law recently established the goal to meet 35 percent of the country’s electricity needs via renewable energy by 2024. “Given the aggressive target the Mexican government has set, that should coalesce into a 2 GW per year wind market in the next couple of years,” Sawyer said.

Sawyer warned that the economic crisis in Brazil could cause a slowdown in its wind industry, which he called “one of the few bright spots” of its economy. In recent years, Brazil has ranked among the top wind markets in the world. According to Sawyer, wind energy is on its way to becoming the country’s number two power source within the next several years.

The newly elected government in Argentina bodes well for wind energy, where plans are underway to increase the country’s renewable energy dependence from 1 percent to 8 percent by 2017. Sawyer said he is hopeful for positive movement in the wind sector there, adding that Argentina has “arguably the best wind resource of any country in the world.” 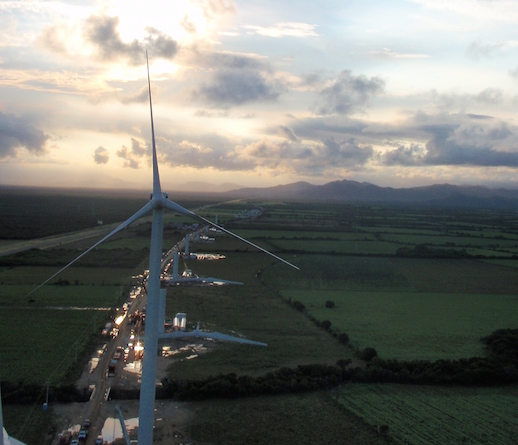 According to numerous sources, the potential energy generation from wind power in sub-Saharan Africa is approximately 1300 GW, far above the energy consumption of the entire continent. Sawyer notes numerous small projects launching throughout the continent – in countries like Ethiopia, Kenya, Tanzania, Ghana, Senegal, Mozambique and Sudan – which aim to tap into that vast potential.

Wind energy has also begun to take off in South Africa, which Sawyer expects will continue to grow as the energy ministry there reaches to leverage renewables as a solution to chronic power outages and rolling blackouts.

Leading turbine manufacturer Siemens indicates it has begun to extend its manufacturing footprint across Europe and Africa to accommodate global demand for wind power. The net result of that expansion is the creation of jobs.

“The new offshore plants for blades in Hull (UK) and nacelles in Cuxhaven (Germany) will each employ 1,000 workers in the next years,” Cheng said. “In another blade plant in Egypt, we will create even more jobs. This underlines how both onshore and offshore wind work as a motor for local economies.”

The Key to Successful Offshore: It’s All About Scale

According to Cheng, the success of offshore wind in countries like the U.S., where that particular arm of the industry is still fledgling, is upscaling. “Larger turbines and projects contribute to a lower cost of energy,” Cheng said, emphasizing that as fixed feed-in tariffs begin to trend toward competitive auction systems, levelized cost of energy (LCoE) will grow in importance.