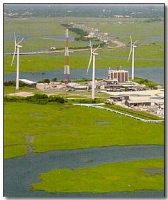 “We think our agreement on the Atlantic City Wind Farm sets a new and higher standard for cooperation by wind power developers to assure protection of bird populations,” said Ted Korth, Director of Policy at the New Jersey Audubon Society. “We are happy to see Community Energy’s interest in acquiring the information necessary to address some of the ecological issues associated with developing wind-turbine projects.” When the Atlantic City Wind Farm was proposed, the Audubon Society appealed the New Jersey Department of Environmental Protection’s decision to approve the project and issue a permit under the Coastal Area Facility Review Act (CAFRA). The area to be studied is the migration route known as the Atlantic Flyway which lies generally between the coast inland to the Appalachians and serves as the thoroughfare for millions of passerines, raptors, shorebirds and ducks making their yearly north-south migrations. Plans for the US $12 million wind farm would place five 1.6 MW turbines right at the coast in an estuary area; so there is a strong possibility of birds flying near and around the turbines. Under the agreement, Community Energy, the developer of the Atlantic City Wind Farm, will join with the Audubon Society to launch a detailed study using new radar technology to better predict how bird migration may be affected by wind turbine towers, which rise between 200 and 300 feet in the air. “Birds are affected by many types of coastal development, not just wind generation,” said Korth. “Like all development, wind-generation facilities must be sited and developed with care for the ecology of the site, including bird populations. This advanced work with radar monitoring will give us the tools to better predict exactly how wind development affects bird populations, particularly the migratory species of the Atlantic Flyway.” Because the Audubon Society and Community Energy have agreed to move ahead with the study the construction of the wind farm will continue as planned. The New Jersey Board of Public Utilities has committed incentive funding to the Atlantic City Wind Farm, which is the first wind generation project in the state, and also expressed support for the settlement, which allows the project to move forward. Off shore wind projects could have a similar study hurdle to get over during the next year. An article in The Star-Ledger stated that Acting Gov. Richard Codey has proposed a moratorium on permits at state funding of at least a year for off shore wind development while the state reviews regulations that apply to such projects. The proposal was announced in the media about a week ago, and no formal decision has been made yet.