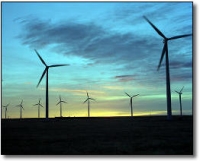 Wind energy project developers, both on and offshore, were given a jolt recently when Sen. Edward Kennedy (D. Mass) revealed plans to back an amendment to the Senate Energy Bill which would have granted project veto power to local officials and state governors with regards to projects on federal lands and waters.

Boston, Massachusetts, August 1, 2003 [SolarAccess.com] Much to the industry’s relief, Kennedy backed off the proposal almost as soon as the news came out. According to Cape Wind Associates, which is the project developer for a proposed 420 MW wind farm off the coast of Cape Cod Massachusetts, the legislation would have placed wind under a higher review standard than nuclear or fossil electric generating plants, or offshore LNG or oil drilling projects. “Even if a wind project meets all statutory and permitting requirements (including in this case the approvals of the Massachusetts Energy Facilities Siting Board and Massachusetts CZM office), it could nonetheless be vetoed at the complete discretion of the governor and/or local officials,” said Laura Martin, Community Relations for Cape Wind in a news alert a few days ago. “This change, for wind only, would override the comprehensive process already in place and seriously set back America’s emerging wind power industry.” Sen. Kennedy’s amendment proposal elicited immediate responses from Cape Wind which circulated email messages alerting supporters of their project and the wind industry. This plea was answered according to a Cape Cod Times article posted on Cape Wind’s Web site. Among them were the Maritime Trades Council and United Brotherhood of Carpenters, two Bay State unions representing 97,000 workers. “With our country facing serious energy supply challenges, air quality and global warming concerns, and the continued reliance upon foreign fuel sources, it is time to encourage and not block the development of clean and renewable energy sources like wind,” wrote Gerard Dhooge, president of the Maritime Trades Council for Boston and the New England Area, in a letter sent Tuesday to Kennedy. While the legislation would have affected more than just the Cape Wind project, Sen. Kennedy has voiced particular concerns with the Cape Wind project. The project would be sited within view of his family’s waterfront property along Cape Cod. “In terms of the Cape Wind proposal, the senator continues to have concerns about the lack of a regulatory framework for such offshore projects to ensure that we are maximizing the benefits and minimizing the costs,” said Sen. Kennedy aide, Stephanie Cutter, in a statement released a few days ago. In the article posted on Cape Wind’s Web site, the developer’s president James Gordon said he was not surprised that Kennedy pulled out from the proposed amendment. “It would be hard for me to believe that Sen. Kennedy, a staunch advocate of wind power, would file an amendment that would create hurdles to wind power that fossil fuels and nuclear plants don’t have to meet,” Gordon said.