Everyone is impressed with the cost reductions in solar modules over the last five year, dropping from $3.25/Wp in 2008 to below $0.70/Wp in 2013. This trend has made solar power competitive with fossil fuels in many markets, and has left many other technologies, such as amorphous silicon or concentrating PV, in the dust. This dramatic cost reduction also has significant implications for the design of a solar array, and even in which components should be used elsewhere in the system. In particular, the cost reduction of solar modules is having a major impact on the racking designs in solar – with implications for the winners & losers in that sector.

Module racking provides the structural foundation (typically aluminum or steel) that secures the modules in place. There are many considerations for the choice of racking, including the application (rooftop versus ground-mount), the structural capacity of a rooftop, and the wind loads for the location and modules.   Additionally, the racking design is tied to the orientation and spacing of the modules, which has major implications for their energy yield.

In particular, module spacing is the key driver of system yield and system size.  With wide spacing, modules are highly productive (since they are rarely shaded), but fewer can be installed at a project location.  As modules are designed closer together, the energy yield will go down from shading, but the array can hold more modules. 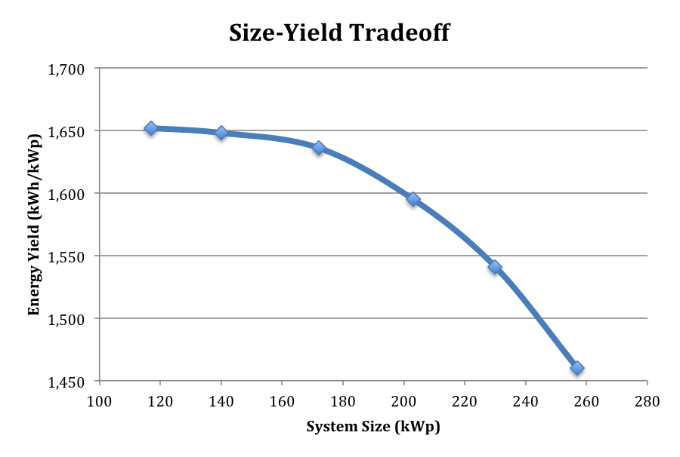 Figure 1: System Yield versus Size.  As more modules are added to an array fixed area, inter-row shading will reduce the productivity of the system

The percentage of the array area covered by modules is known as the ground coverage ratio (GCR).  Engineers adjust GCR to maximize energy yield or profit, and the optimal choice of GCR is primarily a function of the module cost.  At high module prices, designers want to optimize the productivity of each module: since they are the biggest part of the budget, you want to use as few as possible while ensuring you maximize their energy production.  However, as module prices fall, the optimal GCR changes. It becomes advantageous to pack more modules into the array, even if the yield falls. With low module prices, the fixed costs and overhead become the biggest costs in the system. By increasing the total system size, those fixed costs can be spread out over a bigger system, reducing the LCOE.

Once we understand the dynamics of GCR optimization (power versus yield), we can extend this analysis to the racking tilt decision as well.

To maximize energy yield per module, the optimal design would be a tilt equal to the location’s latitude.  However, as modules are tilted flatter, they create less shade — and therefore can be spaced closer together without significantly reducing the productivity of the modules. 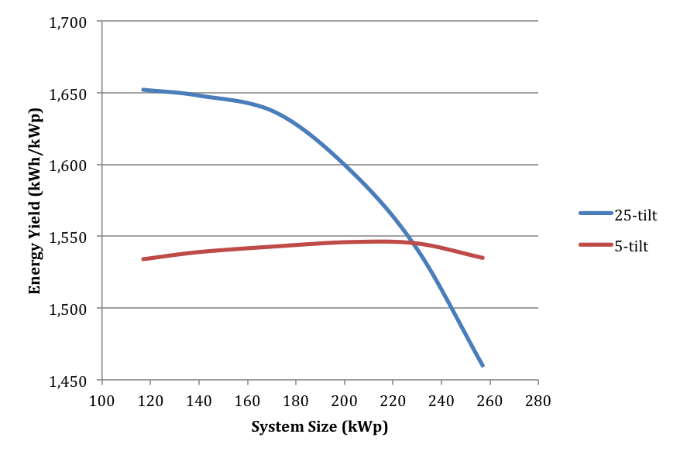 Examining the GCR and energy yield curves of the alternative tilt systems, it becomes clear that the lower tilt maximizes the total energy generated from the array, by maintaining productivity at the largest system size. 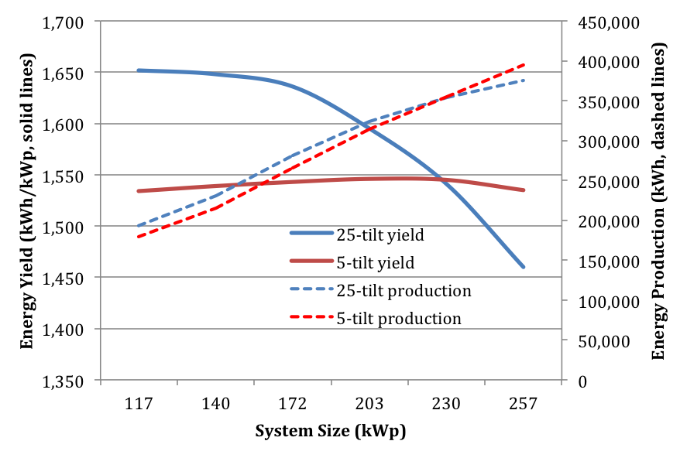 The drive to maximize total profit, in a world of falling module prices, results in systems designed for maximum kWh production. This is a boon for manufacturers of low-tilt racking, and even creates opportunities for new racking designs that embrace this dynamic.  We can see this in the market, with products like Q-Flat racking from Hanwha Q Cells, and East-West racking products from Kinetic and PanelClaw.

Racking tilt isn’t only about system cost and performance.  There are a few other considerations, including the seasonality of the production (better in the summertime), the soiling rates (not as good for low-tilt modules), or the snow rates (low-tilt will do much worse with snow).  Finally, low-tilt racking can often reduce the wind load of a solar project, helping to reduce the total project cost.

The crash in module pricing had a well-documented effect on the module suppliers, forcing many companies into capitulation.  But the change in module prices is also having a dramatic effect on the other parts of the system. And in the brave new world of falling prices, those who understand system economics will have a leg up in profiting from the change.