More
Home Solar What Will Replace the California Solar Initiative?

No one can really debate that the California Solar Initiative, a 3,000-MW solar program started in 2007, has been very successful. In fact, the utility customer portion of the program targeted 1,940 megawatts of solar by 2017 and we’re on track to cross that milestone later in 2013 or early 2014. This is really impressive and good news for Californians.

CSI is an incentive-based system of declining rebates, with a set rebate amount per “bucket” of megawatts in each step of the program. But the CSI’s system of declining rebates is, due to early achievement of the goals, about to go away entirely. This was always the plan: declining rebates were designed to bring the market to a point where it could thrive without any state help. (There is still a 30 percent federal investment tax credit through the end of 2016, as well as accelerated depreciation, which will continue to help the market grow).

As successful as the CSI has been in achieving its goals there is still a good debate over whether the goals were ambitious enough to begin with. California, a state of 40 million people and excellent solar resources, has installed a total of about 1,800 MW of solar over the last ten years, which includes CSI and other programs like the Renewable Portfolio Standard that is focused on utility-scale solar.

However, compare this to Germany’s over 30,000 MW, Italy’s 17,000 MW, or China’s 8,300 MW over the last ten years (with the majority of that installed in just the last two years). And Japan has vastly ramped up its solar programs since the Fukushima nuclear disaster, installing about 10,000 MW of solar over the last decade — with over 5,000 MW expected in 2013 alone. 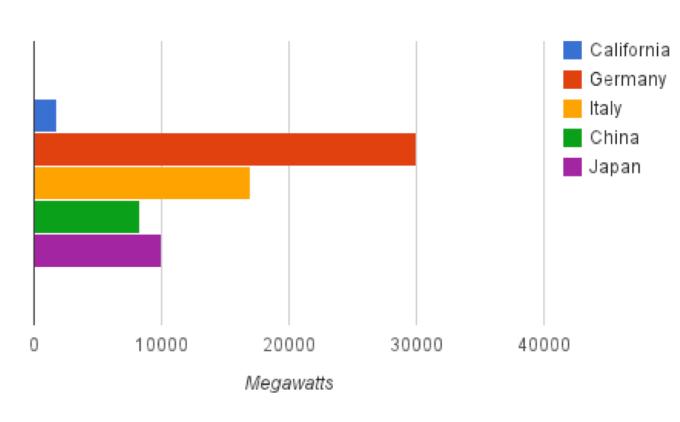 China is a much larger country with a vastly larger population, so it’s probably not a fair comparison. But Germany is a bit smaller in land area and has only twice the population of California. Italy is about 1.5 times our population and about 1/3 less land area than us. Of course, California has far better solar resources than either Germany or Italy.

It seems reasonable to think that California can and should be doing a lot more on the solar front, as well as on other renewables like wind and biomass.

Germany set a record one day in June this year when wind and solar power combined served 60 percent of all of Germany’s electricity needs. That’s a truly remarkable transformation that has taken place in just fifteen years. Germany is the world’s fourth largest economy, so this transformation was no mean feat. Why is Germany so successful with renewables? Anyone who follows the renewable energy field knows it’s because of Germany’s aggressive feed-in tariff policies. Ditto for Italy. Ditto for China and ditto for Japan.

California, usually a leader on energy issues, has unfortunately dawdled on feed-in tariffs. It pioneered the feed-in tariff policy in the 1980s and 1990s before abandoning it for alternative policies. The policy provoked an “embarrassment of riches” because of such strong market response.

Since that earlier era, it’s had a very weak feed-in tariff for the last five years: the AB 1969 feed-in tariff for projects up to 1.5 MW. This program is open to any renewable energy technology but the payment provided is linked to the price of power from a new 500-MW natural gas plant — considered the default type of power in California. Known as the Market Price Referent, this payment was too low to work for 1.5-MW renewable energy projects for the first few years of the program and no new projects were built.

But a couple of years ago the cost of solar power equipment dropped so much that a veritable gold rush occurred with the small feed-in tariff program. Totaling only a few hundred MW state-wide (on a grid that is about 60,000 MW), the program filled up quickly with solar projects and it’s looking good for these projects actually being constructed.

Unfortunately, the AB 1969 feed-in tariff is ending this month and being replaced by a much worse program: SB 32’s Renewable Energy Market Adjusting Tariff (ReMAT). SB 32 was passed in 2009 and was meant as an improvement to the then non-functional AB 1969 feed-in tariff. SB 32 increased the project size to 3 MW, which was indeed a major improvement, but it also provided more flexibility to the California Public Utilities Commission (CPUC) to set compensation levels under the new program.

The new SB 32 program is not only tiny — just a few hundred additional MW state-wide — it also has pricing that adjusts based on demand and will induce a “race to unviability” as developers accept prices that they hope they can finance and build with.

To be clear: ReMAT is not a feed-in tariff because there is no predictability on pricing.

A predictable feed-in tariff with set pricing diminishing over time, as in Germany, would spur a new “embarrassment of riches” in California. The sunset of the CSI is a good opportunity to renew the statewide conversation about feed-in tariffs and how much renewable energy California should be targeting. Some groups are discussing a 50 percent RPS target for 2025 or 2030 and an effective feed-in tariff should be part of that discussion.

Net metering has been very effective at spurring small-scale solar in California. It is, however, arguably an overly complex system that is provoking a backlash from utilities and ratepayer advocates. They feel that net metering is an unjustified subsidy that burdens ratepayers with the cost of grid maintenance that is not paid by those utilizing net metering for their own renewable energy projects.

This is a complex debate and my feeling is that the grid benefits from avoiding new grid infrastructure will partially or wholly compensate for the costs not paid by net metering beneficiaries. But we can avoid that entire debate if we recognize that a robust feed-in tariff is a simpler solution and very likely will be more effective at prompting true market transformation than net metering alone — depending on the size of the feed-in tariff program.

Nevertheless, expansion of California’s net metering program is a viable option for replacing CSI. This is not a debate confined to California. Italy recently suspended its highly effective feed-in tariff program because the program budget was exhausted (very similar to the CSI program budget being exhausted, as planned) and put in place a new net metering program that applies to systems 200 kW or smaller.

“I would say that intelligent rate design offers a potential path to providing fair compensation to customer-generators for the system benefits their PV systems provide,” said Kevin Fox, with the law firm Keyes & Fox and a long-time representative of net metering interests, in response to my questions about replacing the CSI. So for Fox, it’s a matter of not only expanding net metering but also improving rate design.

The solar industry as a whole (not just residential and small commercial solar developers) will do much better under a robust feed-in tariff than under an incremental increase of the net metering cap. Rather than fight the same battle every couple of years to increase the cap, with increasing resistance from utilities, why not invest that same energy in creating a comprehensive, cost-effective feed-in tariff?

I’d suggest a ten-year, 10-GW feed-in tariff program as a good start. That would allow us to truly reclaim the leadership mantle that we lost to Europe some time ago.

What cannot be forgotten in this debate, however, is the cost-effectiveness criterion that can easily be included in feed-in tariffs. Historically, this criterion has often prevented feed-in tariffs from being effective.

The cost of natural gas is the biggest unknown. Even with the very low cost of natural gas we’re currently enjoying, however, solar and wind power can be cost-effective under the Market Price Referent formula. The current MPR is the 2011 calculation and when the MPR is re-calculated (probably later this year) it will surely drop substantially due to the current low price of natural gas. My feeling, however, is that the price of natural gas is likely to rise substantially (for a variety of reasons) and the declining cost curve and improved efficiency of solar and wind, in particular, will continue to expand the cost-effective opportunities for deploying these renewables on a very wide scale.

A robust feed-in tariff should also include payments for grid benefits provided by projects located on the distribution grid, to the degree that such projects actually provide grid support. This idea is generally known as “locational benefits” and my long-time client, the Clean Coalition, has pioneered this discussion.

Wrapping up, my hope is that the Legislature, policymakers and advocates, seriously consider the robust feed-in tariff option alongside debates over the expansion of net metering. The obvious examples from other countries — and California itself during the 80s and 90s — weigh heavily in favor of feed-in tariffs as a viable solution for market transformation.