More
Home Wind Power Onshore What’s the Most Important Thing California Can Do with Its Clean Energy? 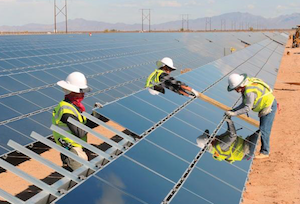 Not often is running the electric grid as simple as applying lessons from childhood. Right now it is — California is learning to share with its neighbors. A bill currently in front of the Legislature from California Assemblymember Chris Holden, AB 813, aims to build a better trading platform to share California’s extra solar power with nearby states like Oregon, Washington, and Nevada, which would then share their extra wind, solar, and hydropower resources with California.

It is like the lunch table you sat around as a kid — one where you can trade that banana pudding that overflows at your house for one of your neighbor’s chocolate chip cookies. It’s a delicious deal, where everybody wins.

That deal just got better. Holden’s office has released new language which represents an important, positive step in the process of creating a regional electric grid for the West. This includes key requirements and protections to ensure a regional grid lowers harmful greenhouse gas emissions and supports California’s climate and energy goals — helping the state and its neighbors to move towards a low-carbon future.

California has more solar power available in the middle of the day than the state can use, but not as many clean resources handy when the sun is rising, setting, or at night. This leads to the need to develop “ramping resources.” Often powered by natural gas, they can provide electricity at any time, which is good. However, if we want to keep reducing our carbon and air pollution from the electricity sector, we need to move away from relying on fossil fuels in this way.

States like Oregon, Washington, and Nevada have different resources, like hydropower and wind, available at different times of day. Accessing these out-of-state resources makes a huge difference in California’s ability to manage the electric grid and build more renewables.

California currently has some ability to share energy resources with other states through the successful and popular Energy Imbalance Market (which, according to recent EIM analytics, displaced nearly 69,000 metric tons of carbon in 2017, equivalent to taking nearly 15,000 cars off the road for a year). However, the amount of electricity we can share is limited in this market, so it doesn’t fully expand our access to clean resources in other states. To return to the lunch table analogy, our current system is like having to arrange these deals from across the cafeteria, trade across multiple tables, and give morsels away in the process.

Related: How the Energy Imbalance Market Is Unleashing Renewables and Saving Millions

What Does the Bill Do?

AB 813 would seek to change all of that — it would enable us to all sit at the same table, so we can make our trades more directly. The California Independent System Operator (CAISO) is our trading platform. Currently, CAISO is governed by appointees from California, so no other states want to join us — we won’t let them on our board. While that approach has worked until now, in 2017 alone California curtailed, or turned off, 345,524 megawatt hours of solar energy, enough to power over 52,000 homes for a year. The Golden State now has to learn to share some of this excess electricity with its neighbors.

The result of input from a large and diverse set of stakeholders, including Environmental Defense Fund (EDF), this new bill language incorporates important changes that protect state autonomy and ensures California meets its climate and energy goals.

Specifically, AB 813 sets up the following:

Still Work to Do

Stakeholders are currently working out many of the details, including those listed above and some that do not even appear in the bill yet. Unlike previous years, there is a robust process to address them.

Assemblymember Holden and his staff asked for stakeholder input and printed a bill six months before the end of session — leaving ample time to focus on resolving any issues. They are working hard to get this right, and they should — we don’t want a school bully to take over the lunch table. Having the right foundation in place will help prevent this from happening.

Yes, there are still issues to overcome. One is the loss of the “buckets system” under California’s renewable portfolio standard — which promotes the development of in-state clean energy.  Another is related to the overall effort by the environmental justice community to reduce pollution from power plants in already burdened communities, an issue California should review with or without a western regional electric grid. Luckily, the substantial, inclusionary, and fair public process AB 813 is following this year can handle these and other important issues.

A regional electricity grid is good news for California and the West. It enables the Golden State to access more renewable resources — because it allows us to share.

This article was originally published by the Environmental Defense Fund here and was republished with permission.