It was a year ago this week that Apple CEO Tim Cook responded to a climate-change heckler at the company’s annual shareholder meeting with an impassioned rebuttal in which he famously told investors who care only about profits to “get out of the stock.”

Now Cook is putting his prodigious sums of money where his mouth is, proclaiming the “biggest, boldest and most ambitious project ever,” an $850 million agreement to buy solar power from First Solar, the biggest U.S. developer of solar farms. The deal will supply enough electricity to power all of Apple’s California stores, offices, headquarters and a data center, Cook said Tuesday at the Goldman Sachs technology conference in San Francisco.

It’s the biggest-ever solar procurement deal for a company that isn’t a utility, and it nearly triples Apple’s stake in solar, according to an analysis by Bloomberg New Energy Finance (BNEF). “The investment amount is enormous,” said Michel Di Capua, head of North American research at BNEF. “This is a really big deal.”

The agreement positions the CEO of the world’s biggest company at the center of the global debate about climate change and the future of energy — a role Cook has increasingly embraced over the past two years. The company has been ramping up its investment in solar, with two 20-MW plants completed and a third under development in North Carolina, and a 20-MW plant in development in Reno, Nev. All of Apple’s data centers are now powered by renewables.

“We know that climate change is real,” Cook said Tuesday. “Our view is that the time for talk has passed, and the time for action is now. We’ve shown that with what we’ve done.”

Wind power has long been cheaper than solar, and other tech companies like Google, Microsoft and Amazon have taken advantage by investing heavily in wind.

But the sun is the future. The price of solar has been declining quicker than that of wind, and by 2050 solar could be the world’s biggest single source of electricity, according to the International Energy Agency. The Apple deal is the first of its size for solar, a milestone on the road to cheap, unsubsidized power from the sun. 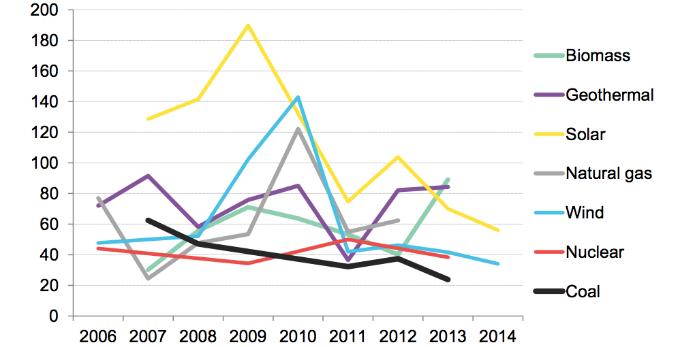 Apple isn’t investing in solar as a gift to humanity. It’s doing it because it’s a good business deal, Cook stressed at the Goldman Sachs conference. “We expect to have very significant savings,” he said.

As if to underline that fact, within minutes of announcing the solar deal, Apple’s stock ended the trading day with a record valuation of $711 billion, making it the first U.S. company to cross the $700 billion mark. Shares of both Apple and First Solar surged.