More
Home Blogs What a Utility Can Be

If the Upper Big Branch coal mine cave-in that crushed 29 miners in early April has slipped from memory and the images of West Virginia mountain ranges ruined by surface mining are too difficult to think about, consider Climate Stabilization Targets: Emissions, Concentrations, and Impacts over Decades to Millenia, a new report from the National Academy of Sciences. It says a 1.8 degree Fahrenheit (1 degree Celsius) increase in temperature – to which the world average temperature is now about halfway – will (a) reduce rainfall 5%-to-10% in the already drought-burdened American Southwest, Mediterranean and southern Africa regions, (b) drop stream flow 5%-to-10% in river basins like the Arkansas and the Rio Grande, (c) reduce yields of U.S. and African corn, Indian wheat and comparable crops by 5%-to-15%, and (d) move dangerously close to warming that would double, or possibly quadruple, the size of wildfires in the American West.

As explained in Ceres’ new report, The 21st Century Electric Utility: Positioning for a Low-Carbon Future, generating the electricity that keeps the lights on and the air conditioning running also generates 40% of U.S. greenhouse gas emissions (GhGs). The greenhouse effect those GhGs create is driving the anthropomorphic (human-caused) global average temperature rise that accelerates the emergence of the anthropocene, a new geologic era in earth’s history (named by Nobel prize winning atmospheric chemist Paul Crutzen) in which human activity is determining the planet’s climate and its inhabitants’ fate.

The good news is that, according to The 21st Century Electric Utility, remedies are not only at hand, they are the most economically competitive choices for the people who run U.S. utilities and are charged with the awesome responsibilities of keeping the nation’s lights on and its a/c running. The report describes what is happening with utilities at present, the changes utilities need to make and the barriers to their transition to a New Energy economy. ::continue:: 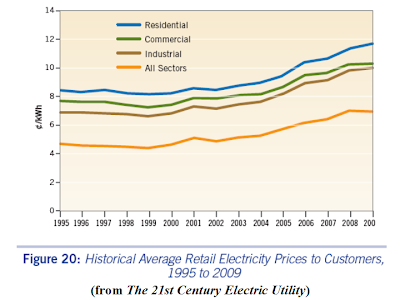 4 key trends the report identifies are: (a) Increasing pressures to cut emissions 80% below 1990 levels by 2050, the scientifically-determined level needed internationally to interrupt worsening climate change; (b) increasing momentum in state, regional and federal policies and regulations that will make fossil fuel-generated electricity –especially coal-generated electricity – too costly to compete in the marketplace against emissions-free sources; (c) the increasing introduction of Energy Efficiency and Smart Grid technologies that are the cheapest way to cut emissions and reduce the demand for emissions-generating sources; and (d) progressively falling costs for New Energy sources.

The single specific addition to existing policies crucial to transitioning utilities to more New Energy and Energy Efficiency is the decoupling of utility profits from the volume of electricity sales. In states where such decoupling is rewarded, utilities increase efficiency 1%-to-2% per year on an ongoing basis and drive the maximum increases in both utility scale New Energy (wind installations, solar power plants) and distributed energy generation (rooftop PV, geothermal heat pump systems). Where there is no decoupling, utilities face losses in profits from such action and efficiency does not improve.

More broadly, the Ceres report concludes with a detailed list of recommendations that can reasonably be summarized as: (1) Do everything possible to increase Energy Efficiency, (2) use the savings to build New Energy, (3) don’t waste time or money on Old Energies that are dangerous and toxic and (4) NOW! 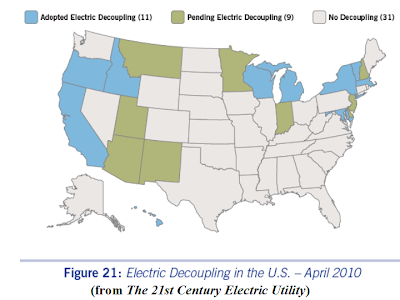 This post is based on Report: Climate Change, Emerging RE Technologies Driving New Business Models (9 July 2010, Renew Grid) and Climate Stabilization Targets: Emissions, Concentrations, and Impacts over Decades to Millenia (July 16, 2010, The National Academy of Sciences)