More
Home Blogs What a Difference Sun Policies could Make

A coal mine disaster that crushed 29 and an oil well rupture that incinerated 11 and is despoiling an ecosystem mark the way. Spring 2010 is tolling the doom knell of fossil fuels in this nation. But Big Oil and Big Coal are not going gently into the New Energy economy. They are flailing back with all their skill.

Because in the 1970s when there were two oil embargoes and far-sighted people clamored for New Energy, the so-called wise men of the fossil fuel industries said, “well, we’d like to use the sun and the wind but there just isn’t enough of it.”

In the early 1990s, Saddam Hussein acted out, threatened the flow of civilization’s oil, brought the wrath of the world down on himself, and then retreated, burning the oil fields and turning the Arabian Gulf into an ecological horror behind him. Those same far-sighted people, a decade older, clamored again for New Energy. Once again, the answer was “there just isn’t enough of it.”

The clarion call for New Energy was heard again after September 11. The answer was the same.

Though many of the great ones who first envisioned the New Energy economy in the 1970s are gone, they left behind a movement and incipient New Energy and Energy Efficiency industries and their heirs are once again raising the clamor, in response to this spring’s heartbreaks in the mountains of West Virginia and along the Gulf Coast.

The fossil fuel industries’ response is unchanged but this time there a question rising from the hollow futility of the endless debate. It is a question being asked by everyday people all over the nation, young and old, rich and poor, of every color and political persuasion: “Why ISN’T there enough New Energy?” ::continue:: 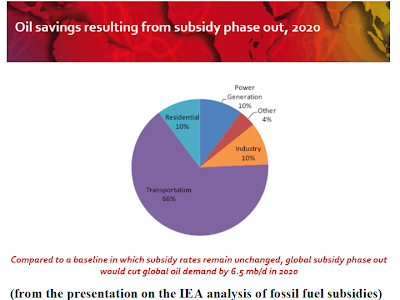 To that question there is a very good and very specific answer: Politics. When a charismatic champion emerges, politics can seem very exciting. But real politics is anything but exciting. It is as slow as paint drying and about as stimulating. It inevitably alienates the idealistic and empowers the cynical. Through such politics, Big Oil and Big Coal have maintained huge subsidies for themselves and prevented the New Energies from winning the incentives they desperately need to make the playing field with the Old Energies level.

Case in point: U.S. Solar Policy Impact Analysis: Economic Impact of Extension of the Treasury Grant Program (TGP) and Inclusion of Solar Manufacturing Equipment in the Investment Tax Credit (MITC), from EuPD Research, documents the enormous value that would come in the solar energy industries from simply sticking with two policies that have already proven their effectiveness at supporting the growth of solar energy capacity, policies that are on the verge of being defeated by a Congress controlled by fossil fuels money and committed to sustaining fossil fuels subsidies instead.

Extending the Treasury Grant Program created in the 2009 Recovery Act for two more years would bring $21 billion to the 2010-to-2016 investment in U.S. solar electric technologies, add 67,000 jobs by 2015 and grow solar capacity by 5,100 megawatts (MWp). Funding the Recovery Act’s Manufacturing Investment Tax Credit (MITC) could make the U.S. solar industry more competive, cut the price of solar and grow demand. It is calculated to bring increased investment of $22 billion, add 158,000 jobs by 2016 and up U.S. solar capacity by 5,600 megawatts (MWp). Together they would up investment $39 billion, add 207,000 jobs and grow capacity by 9,800 MWp.

It remains an open question whether Congress will make such incentives available to solar and the other New Energy industries. The Old Energies will be exerting the political power of Big Money to prevent it, as usual. Political action anyone? 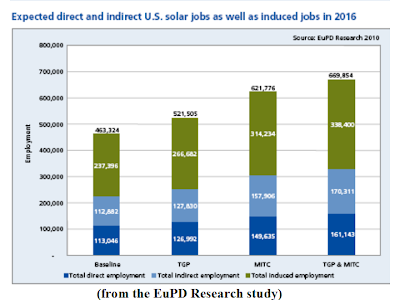 This post is based on U.S. Solar Policy Impact Analysis: Economic Impact of Extension of the Treasury Grant Program (TGP) and Inclusion of Solar Manufacturing Equipment in the Investment Tax Credit (MITC) (May 19, 2010, EuPD Research)