I recently wrote about Western Wind Energy’s (TSXV:WND, OTC:WNDEF) plans to increase the 1603 cash grant for their Windstar wind farm. But that was not the only thing discussed in the conference call.

UPDATE: Western Wind has just announced that they are selling the company. Looks like the disgruntled shareholders (and anyone looking for a quick profit) won.

During the Q&A, many investors were concerned about Western Wind’s recent deal to acquire a 4 GW wind development pipeline from Champlin/GEI Wind Holdings.

The concern was that the company would be issuing 8 million shares for the assets, but the company has revealed very little about the projects.  With the federal Production Tax Credit (PTC) set to expire at the end of 2012, many development projects will not be viable.  In the absence of more information, the entire four gigawatts of potential could effectively be worthless.

On the other hand, the loss of the PTC doubtlessly affected the price paid for the assets.  Champlin/GEI had invested “almost $20 million” in the pipeline so far, and Western Wind is acquiring the pipeline for 8 million shares, at a notional value of $2.50 per share ($20 million.)  At the current market price of only $1.25 a share, that’s $12.5 million, but if we consider Western Wind’s net asset value per share, which I put at over $5 per share, then the company is paying over $40 million for the assets.

What is the development pipeline worth?  I think it’s safe to assume that most of the 4,000 MW of projects will not be built without the PTC.  But the company has spoken of a near term project 75 MW project Hawaii, which they say is viable without the PTC.  Given that Hawaii has extremely high electricity prices (most electricity is generated from oil) and an aggressive renewable energy mandate, it’s quite believable that a project in Hawaii would be economical without the PTC, despite the high cost of building anything in Hawaii.

The company has also claims that other projects in the pipeline will be viable without the PTC, but has given few details.

In response to investor’s questions during the conference call, President and CEO Jeff Ciachurski was not particularly forthcoming.  He says he cannot reveal more details about the projects in the pipeline because it would provide ammunition to opponents who want to reduce the price paid for wind power in the power purchase agreements he negotiates with utilities.  Like investors’ concerns about lack of transparency, Ciachurski’s worries are valid.  If the company tells investors it will receive a high rate of return on a project, utility customers will use that statement in front of regulators to try to reduce the amount the utility pays the company for electricity.  In other words, information is a two-edged sword.

From his tone in conference calls, Ciachurski seems offended by the implication that the Champlin/GEI deal will not be a good one for investors.  He asks us to consider his track record, management’s ability to grow its assets and projects.  The value of Western Wind’s projects has been validated in two ways: by the in-depth due diligence of the leading banks among the project lenders, and by the independent valuation the company commissioned last year, on which I based my $5 to $6 valuation of the stock.

Western Wind’s 2004 annual report shows only $200 thousand in liabilities on the balance sheet.  On March 31, 2012, the most recent quarterly report shows $360 million in liabilities.   Over those seven years, the amount of money banks were willing to lend grew at a compound annual growth rate (CAGR) of 187%.  The book value of assets on the balance sheet also grew, from $3.3 million to almost $400 million, a 93% CAGR, although this greatly understates the growth in the value of Western Wind’s assets, since they are shown on the balance sheet at cost, not on a discounted cash flow basis. 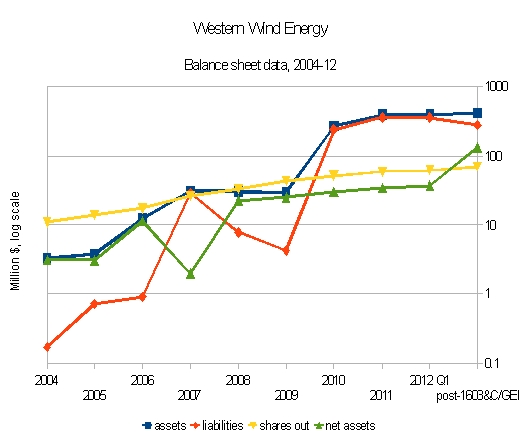 Data source: Western Wind financial statements and press releases.
Note that assets are shown at book value, and are much lower than they would be in a DCF analysis.

Given that track record, I’m willing to give Ciachurski and his team the benefit of the doubt on the Champlin/GEI pipeline.  I agree that Western Wind could reveal more about their pipeline than they are without tipping their hand in PPA negotiations, such as a list of projects giving their locations, potential megawatts, wind regime, and a rough idea of how much progress has been made on them.The company has issued shares to fund some of this growth: shares outstanding rose six-fold, a CAGR of 27%, but not in a dilutive way.  Even using just the balance sheet values of net assets, net assets per share grew from $0.29 to $1.85 (after the receipt of the reduced cash grant), or over 30% CAGR.

In short,  I don’t like the secrecy, but I’m willing to put up with it because I’m able to buy Western Wind shares at a tiny fraction of what I see as their true value.

Data source: Western Wind financial statements and press releases.
Note that assets are shown at book value, and are much lower than they would be in a DCF analysis.

There are some who say any trust in Ciachurski is misplaced.  I’ve received comments on my articles saying that “ the executives have been plundering the company for years with impunity,” but if such plundering occurred on any large scale, we would not have seen the asset growth discussed above.  I was also contacted by a Vancouver-based private investigator, who claimed to be working for a group of investors who had been swindled by Ciachurski.  He asked me to publish his research linking Ciachurski to convicted felons.  But he was unable to substantiate the linkage, other than to repeat hearsay from unidentified individuals.Rumors

The company says such allegations are the work of a group of Vancouver based hedge funds, who have been buying the stock near current prices ($1.25 a share) and want to sell the company to a buyer like Algonquin Power (TSX:AQN, OTC:AQUNF), which made and offer of $2.50 a share last October.  Even if the unsubstantiated allegations about Ciachurski “plundering the company” were true, the plundering has been minimal, since shareholder value has increased substantially during the  supposed plundering.  That’s hardly typical of a company with unscrupulous management: Shareholder value in such companies almost always goes down, not up.  We only have to look to wind turbine and solar manufacturers to see many examples of honestly run renewable energy companies with rapidly dropping shareholder value.

Although I’m not averse to a quick profit (most of my stake, like that of the Vancouver hedge funds, was acquired around the current price), I agree with Ciachurski that the best time to sell Western Wind will be after the company’s recently completed projects have been producing cash for a few quarters, and the Yabucoa solar project in Puerto Rico is complete.  The company expects that each of the next seven quarters will be record quarters for revenue and earnings, and they can say this with a good degree of confidence.  The revenue in question depends only on the wind blowing, the sun shining, and utilities with good credit ratings paying for the power generated.

At $1.25 a share, I don’t see much downside.  If the Vancouver funds manage to force an immediate sale, I get a quick 2x profit.  If Ciachurski gets his hoped for sale in 2014, I get a 4x or even 8x profit after only a couple years.  That seems worth the wait.

This article was first published on the author’s Forbes.com blog, Green Stocks and AltEnergy Stocks and was republished with permission.