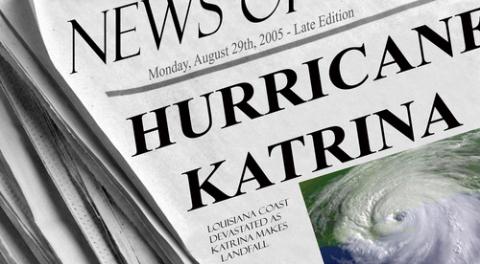 In the wake of Hurricane Katrina, Wal-Mart Stores Inc. pledged to rely fully on renewable energy and sell products that sustain the environment.

Eight years later, the Bentonville, Arkansas-based retailer is failing to carry out its environmental pledges, according to a report an environmental group released today. Its greenhouse- gas emissions are rising, and its share of renewable energy, measured as a percent of power it uses, lags behind rivals such as Kohl’s Corp. and Best Buy Co., according to the report.

“Rather than allocate resources to reduce emissions, Wal- Mart has launched a publicity campaign that boasts of solar installations while green-washing the true environmental costs of its business model,” Stacy Mitchell, a senior researcher at the Institute for Local Self-Reliance and author of the report, said in a statement today.

Wal-Mart, the world’s largest retailer, is drawing the attention of environmental groups such as the Sierra Club because its reach is so long, and its pledge so dramatic. In 2005, then-chief executive Lee Scott mentioned the devastation in New Orleans from Katrina, and then pledged that becoming more efficient would help both the environment and the company’s bottom line.

In response to today’s report, the company stressed the progress it has made.

“The results speak for themselves — we’re showing that we can grow our business while slowing our greenhouse gas emissions, improve the supply chain, make renewable energy more affordable and serve our customers for generations to come,” Tara Raddohl, a company spokeswoman, said in an e-mail.

The retailer met a goal of cutting greenhouse gases by 20 percent at its existing stores, and has increased the mileage efficiency of its fleet of trucks, the company said. It predicts that it will begin reducing its overall emissions by 2020, even as it grows the number and size of its stores.

Mitchell and environmental allies say the company is falling short of its pledge to use all renewable energy, with just 4 percent of its power coming from renewable sources it operates. Another 17 percent of renewable energy is supplied by the grid. As it continues to grow, Wal-Mart has continued to generate more total emissions.

“It’s not willing to adjust the core aspects of its business model,” Mitchell said. “Despite its 2005 pledge, Wal- Mart has not become a climate leader.”