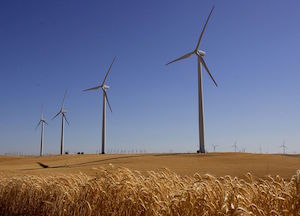 Yet most of the product gets shipped out to the wind belt running from Texas to North Dakota. Nine southern states have no wind farms at all, but that may soon change after a Virginia utility requested proposals for 300 MW of new clean power plants.

A combination of taller towers, longer blades, smart controls and lower costs are driving interest in turbines in the region with the weakest winds in the U.S., said John Hensley, deputy director of industry data at the American Wind Energy Association.

“Manufacturers clustered around the Southeast where GE makes a lot of turbines,” Hensley said in an interview Thursday. “Now the machines are bigger and smarter, and you’re seeing the market open up to a low-wind region.”