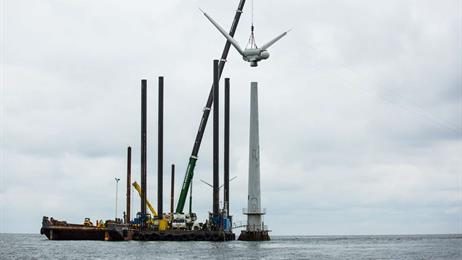 DONG Energy announced its Vindeby Offshore Wind Farm, the first offshore wind farm in the world, has been dismantled.

The company established Vindeby as a demonstration project to prove offshore energy generation was possible. However, after 25 years the company determined the 11 wind turbines were worn down.

Blades, nacelle and the towers were dismantled individually by a mobile crane and placed on board a jack-up vessel. The concrete foundations were broken down with hydraulic demolition shears, a hydraulic hammer and milling tools.

“This is the first time we’re dismantling an offshore wind farm, but luckily, we’ve been able to draw on our vast experience from constructing offshore wind farms and working offshore,” said Leif Winther, Senior Lead Business Developer in DONG Energy. “In cooperation with the winning contractors, we developed the dismantling method and entered a long process with the authorities to obtain all necessary permits.”

Many of the components will be reused as spare parts for other wind turbines, while the blades will be reused in a noise barrier concept and a research project at DTU Risø. One turbine will become part of the exhibition at the Danish Museum of Energy.

Over its lifetime, Vindeby generated 243 GWh of power from its 11 turbines. Each of the turbines had a capacity of 0.45 MW, and had a blade length of 17 meters and a hub height of 37.5 meters.