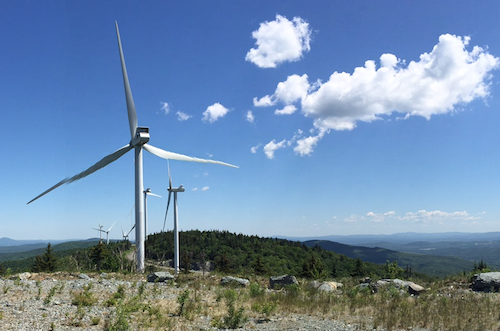 Vermont utility Green Mountain Power (GMP) opened its 63-MW Kingdom Community Wind (KCW) project to visitors this spring to give people the opportunity to see first-hand the results of nearly seven years of planning and construction. 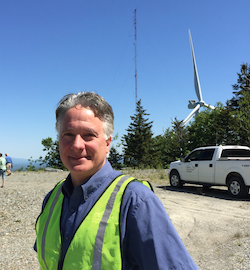 Completed in December 2012, KCW is comprised of 21 Vestas V112 3-MW wind turbines located along a mountain ridge in Lowell, Vt. About 20 people joined the project tour on June 18, learning about the benefits of the project, how GMP handles the project’s clean energy attributes, and what kind of maintenance is required to keep the wind turbines operating efficiently.

Before starting the tour, GMP spokesperson Robert Dostis talked with visitors about the ways GMP mitigated the effect that the project has on the land.

According to Dostis, construction activities affected a total of about 135 acres. The utility re-vegetated about 40 acres, including planting 4,000 trees on the mountain ridge. The final remaining affected land — from access roads, an on-site operations center, substation, and turbine pads — totals about 95 acres. GMP also permanently conserved about 2,800 acres, including 1,100 acres in Lowell, and 1,700 acres in nearby Eden, Vt.

Dostis said that power from the project goes to local communities, and when there isn’t sufficient local demand, the excess power is delivered to Vermont’s bulk power grid. GMP sells the clean energy attributes for the project in order to keep the cost of the project’s power low for customers.

“The power from this plant costs about 9.3 cents per kWh,” he said. “The credits are sold at 5 to 6 cents per kWh, and that’s bringing the cost of this power to our customers to 3 to 4 cents [per kWh]. That’s really, really good.” 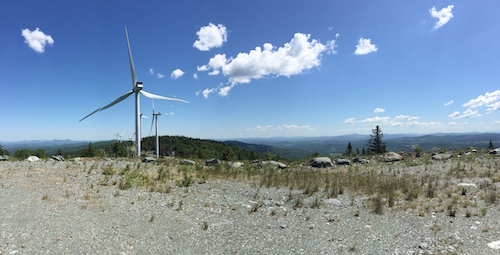 Once GMP sells the renewable energy credits (REC) associated with the power at KCW, the utility can’t claim the power as renewable in its portfolio. By next year, GMP will be required to obtain 55 percent of its power from renewables under Vermont’s renewable portfolio standard.

“In meeting that mandate, we won’t be using the RECs from [KWC] because it’s still more beneficial for our customers for us to sell those RECs and purchase renewable power from other sources, which is what we’ll be doing,” Dostis said.

Gregory said GMP performs annual maintenance on the turbines from April to October, and it takes about 40 hours per turbine. Maintenance requires hundreds of check points, including, for example, changing oil, checking coolants, checking gearbox vibrations, and checking torques on the tower sections.

Tours of the project will continue through the end of July.