U.S. wind power, with almost 10,000 megawatts of new installed capacity built in 2009, had its 6th consecutive record-breaking year of growth. For the 4th year in a row, wind was second only to natural gas as the preferred source of new electricity generation.

Perhaps the most important part of wind’s record-breaking year, as profiled by the American Wind Energy Association (AWEA) in its Q4 2009 summary, is that the performance came despite the worst recession since the Great Depression of the 1930s and a credit freeze that left much of U.S. business and industry nearly paralyzed. Buoyed by support from the Obama administration, wind saw growth in construction, operations and maintenance, and management jobs and was a singular bright spot in an otherwise bleak economic picture.

The one sector of the wind industry that stalled due to the financial downturn, despite provisions in the American Recovery and Reinvestment Act (ARRA) designed to sustain growth, was manufacturing. Plans made in 2007-08 to expand wind’s manufacturing capacity did not come to fruition in 2008-09. This was only in part because of the lack of financing.

The hesitation of international and national wind manufacturers to expand U.S. capacity had much to do with the failure of Washington, D.C., to implement policies that would assure a growing market.

While the U.S. continues to haggle over the proposed offshore wind projects in the New England, Mid-Atlantic and Great Lakes regions, European nations continue to lead the way in developing ocean wind resources.

The European offshore wind industry – key trends and statistics 2009, from the European Wind Energy Association (EWEA), makes it clear that European wind manufacturers and developers, with enormous financial backing from their governments and visionary policy guidance from the European Commission, are pioneering offshore technology and positioning themselves to dominate the sector. ::continue:: 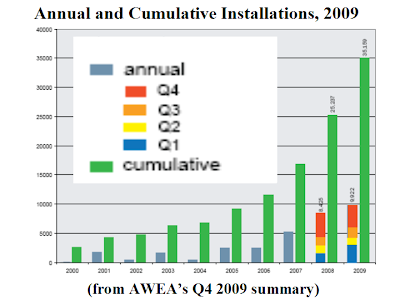 Eventually, installations will be green-lighted in North America and throughout the rest of the world. By then, Europe’s wind industry will have manufacturing and field development expertise that will make them more than merely competitive in the field. It will be virtually necessary for U.S. manufacturers and developers to share the wealth of their markets in order to build state-of-the-art projects.

Utilities and developers are at present estimated to have 100+ gigawatts of potential offshore wind installed capacity being planned. 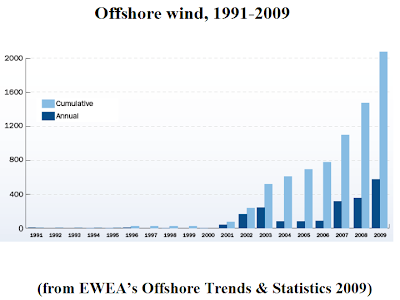