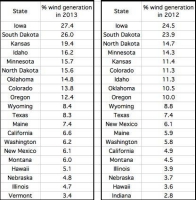 New Hampshire, USA — Wind energy continues to improve its standing in the U.S. energy footprint, generating over 167 million MWh in 2013 and accounting for more than four percent of electricity generation, according to the latest information from the Energy Information Administration (EIA) and American Wind Energy Association (AWEA). Wind energy also has represented 30 percent of all new generating capacity over the last five years.

The data builds on AWEA’s 4Q13 market review with the EIA’s December generation data, and is a preview of AWEA’s full annual market update in early April.

“We knew there’d be a big jump” showing wind energy uptake over the past year, given how much wind capacity was built out and completed at the end of 2012 and given a full year of generation under its belt, explained Elizabeth Salerno, VP of industry data and analysis.

Nine states now get more than 12 percent of their electricity generation from wind power, and 17 states top 5 percent. Iowa and South Dakota still rank 1-2 in U.S. wind energy generation, increasing their production in 2013 from ~24 percent each to more than 27 percent and 26 percent, respectively. Kansas leapt from 11.4 percent wind contribution to more than 19 percent, after doubling its wind energy output in 2012, and other big climbers on the list included Idaho (11.3 percent to 16.2 percent) and Oklahoma (10.5 percent to 14.8 percent). Texas continued to shine — generating nearly 36 million megawatt-hours of wind energy in 2013, enough to power 3.3 million homes — as the completed CREZ transmission lines are finally enabling new capacity development in the panhandle to be delivered to load centers in Dallas and Houston. California increased its wind generation contribution to 6.6 percent, which is “pretty incredible” for a state with such heavy load and demand, she said. 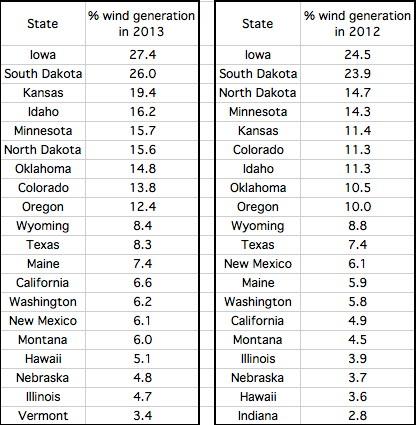 But it’s not all about the big wind states getting bigger. Salerno pointed to new markets where wind is starting to gain traction due to technology upgrades (taller turbines, longer blades), RPS programs, and costs coming down. Michigan, for example, doubled its wind generation contribution in 2013 (though still a small ~2.4 percent of total generation) thanks to a number of new utility-scale projects by DTE Energy and driven by the state’s RPS program, and costs coming down by half in the past few years with bids now as low as 4-5 cents/kWh.

Also note that these numbers reflect in-state wind energy generation, not where that wind energy is put to use — often it’s piped into other states and regions, e.g. from the Dakotas into Illinois, Maine down to Massachusetts, and Kansas/Oklahoma/Texas into the Southeast states, often to meet different states’ RPS needs. But that too reflects the growing reality for many states that wind-produced energy under long-term contracts is increasingly becoming a cost-effective option.

Note from AWEA’s 4Q13 report, this chart illustrates the impact of uncertainty about the potential expiration (and ultimate last-minute renewal) of the production tax credit (PTC) at the end of 2013, which basically cleaned out the development pipeline, and took half of 2013 to recover. By December 2013 it had built up again, to record levels: AWEA is tracking a record 12 GW of wind project capacity under construction, and Texas’ ERCOT alone has 7 GW of new capacity now under construction. Softening the PTC’s language to “under construction” criteria removed short-term urgency around the PTC, which was officially allowed to expire in December. Industry participants and experts generally believe 2014 will be a good growth year for wind energy, not equaling the boom seen in 2012. 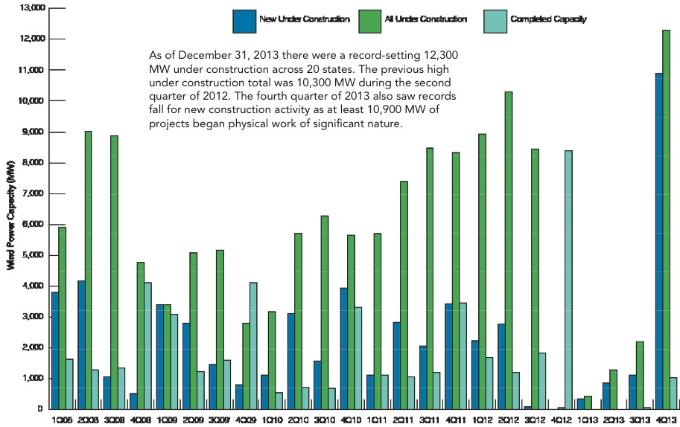