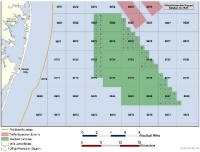 New Hampshire, USA — Another step forward for U.S. offshore wind energy today, with the Interior Department (DOI) and Bureau of Ocean Energy Management (BOEM) announcing their third auction for offshore wind project: this one in Maryland, spanning roughly 80,000 acres about 10-30 miles offshore from Ocean City, with the potential of 850 to 1,450 MW of wind power capacity, according to NREL estimates.

The proposed “Maryland Wind Energy Area” will be auctioned as two leases (a North region and slightly larger South region). A handful of companies had expressed interest in Maryland offshore development a year ago, note local reports. (The proposal was expected earlier this fall, but was pushed off the agenda by the government shutdown.) Here’s a map of the proposed offshore area, and here’s the official announcement in the Federal Register.

Next steps are a 60-day public comment period ending Feb. 18 — during which period applicants are strongly encouraged to submit proposals in hopes that they be deemed worthy and sound by the BOEM to participate. BOEM also will host a public seminar during this timeframe to go over the auction format and rules (date/time TBA). That will be followed by a Final Sale Notice (no timeframe indicated), a month from which the lease auction timing of the lease sale will be announced. An environmental assessment for the lease areas has been conducted, but the BOEM will conduct a more site-specific one for construction of any wind power facility. 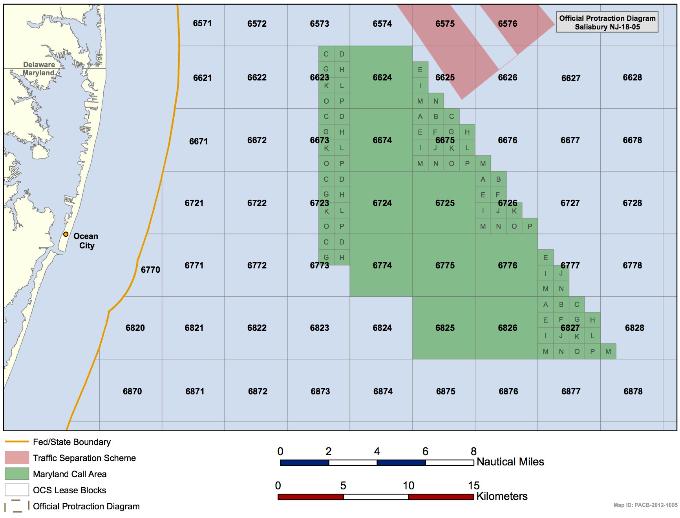 The inaugural auction of renewable energy in U.S. federal waters held in late July was won by Deepwater Wind New England, which paid out about $3.8 million for the rights to develop on two parcels spanning 164,000 acres off the Rhode Island and Massachusetts coasts with combined potential of nearly 3.4 GW of wind generation. The BOEM’s second auction held in early September, won by Dominion for $1.6 billion, targeted roughly 112,000 acres off the Virginia coastline with potential wind generation exceeding 2 GW. More offshore wind auctions are in the works for other East Coast states, most notably New Jersey, North Carolina, and Massachusetts, expected to take shape in early 2014. The BOEM also is looking into a potential auction for offshore wind resources in Oregon after Principle Power expressed interest in development there. BOEM already had issued two non-competitive lease approvals for Cape Wind in Nantucket Sound and an area off Delaware. The latest update from Cape Wind indicates the long-delayed 420-MW project expects to start construction and qualify for the production tax credit (PTC) by year’s end.