More
Home Wind Power US Senators Urge Wind PTC Clarification, But Is It Time To Look...

New Hampshire, USA — A bipartisan group of US Senators, led by Michael Bennet (D-CO) and Jerry Moran (R-KS), have sent an open letter to the US Treasury and IRS asking them to speed up their clarification of new language in the renewable energy production tax credit (PTC).

The language, added with the 11th hour (probably closer to 11:59th) extension of the wind PTC, changes the criteria for qualification under the PTC as being a form of “under construction.” What exactly that means, and thus what companies need to achieve and prove to qualify, is the question — and the main concern as we move weeks ahead into 2013. Some speculate that clarifications could take a cue, or wholesale definition, from what was in the former Section 1603 grant: a certain amount of physical work being put in, and/or a set small percentage of project cost invested.

Many wind industry watchers expect the domestic U.S. wind market will be quiet in 2013. Matt Daprato, North American wind analyst with IHS, projects 2 GW and maybe as much as 3 GW. That follows the blowout 12 GW installed in 2012, much of that rushed to get completed ahead of the previously expiring wind PTC. That frenzy of activity also effectively drained everyone’s construction-ready wind project pipelines, as AWEA’s latest data shows: 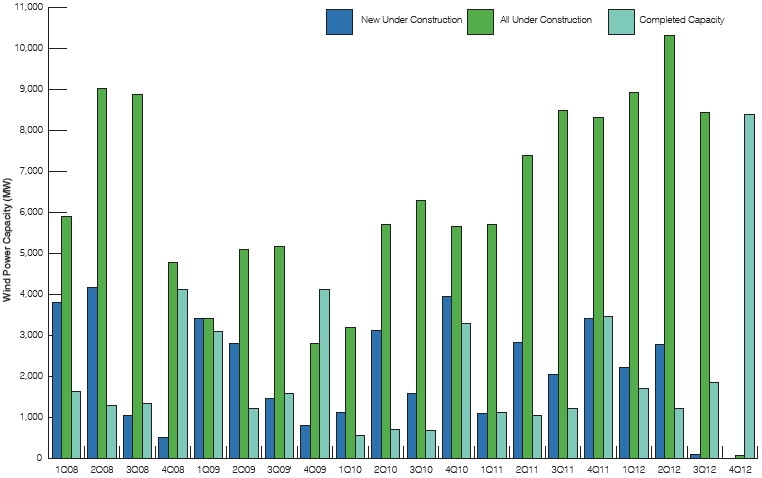 What spurred this renewed call now for wind PTC clarification? “If this lasts too much longer, there are concerns that it will slow down orders, and cause a problem for everybody,” explained Adam Bozzi, spokesperson for Sen. Bennet. His state of Colorado has 6,000 statewide jobs related to the wind industry — including a Vestas factory which may already be in peril, according to recent reports.

One of the few wind developers who is (publicly) expecting a good 2013 is First Wind, though the bulk of its possible 50 percent expansion this year (locations include Maine, Oregon, Washington, Idaho, Utah, and Hawaii) probably will be largely backend-loaded. “We’re confident that the Treasury Department understands the need to quickly clarify the language, and we expect them to have details in the near future so that we can plan accordingly,” said John Lamontagne, First Wind’s director of corporate communications. “We’ll be ready to move ahead with our plans when that happens.”

First Wind, NextEra, and Detroit Edison all have some projects in their 2013 pipeline, Daprato says, but generally speaking “there is not this hidden pipeline of projects that people aren’t talking about.” Unless wind projects are already at a very advanced stage, the pending clarification about construction-readiness language in the wind PTC may not matter, at least for this year, he notes. There’s a leadtime for getting turbines to the site, or building access roads or infrastructure work, not to mention tying off local permits or any required transmission/substation upgrades. For a sizeable wind project that means “a very, very tight turnaround” to get things moving by year’s end. Each passing day moves the needle further ahead. “Most of what’s under discussion now for the pipeline is really targeting 2014,” he said. If developers are signing contracts at this point, “it’s likely for 2014.” Assuming a year (or more) is required from shovels-in-the-ground to connection, if clarity about this year’s wind PTC doesn’t come for weeks or months, we’re probably talking about projects that (if they qualify) won’t come online until 2015.

Which begs the question: the more we urge and await clarification on the 2013 wind PTC extension, aren’t we just biding time until we have to start planning the next last-minute wind PTC renewal for 2014, where the stakes are higher? Developers “are already looking at what they can do next,” and will need to quickly refocus on what are the next crop of market opportunities and projects, said Daprato. Ideally those discussions happen “ASAP,” providing a longer runway to the outlook and more clarity, he said. History, however, suggests the opposite: another last-minute renewal of the PTC “no sooner than it has to be,” and probably a one-year extension clung to a broader bill.