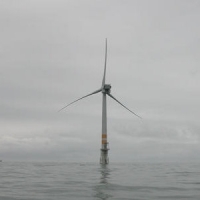 Boston, United States [RenewableEnergyWorld.com] The U.S. has made great strides in installing renewable energy projects in the last five years. Renewables account for a larger percentage of U.S. energy generation than ever before and the country has surpassed Germany to lead in installed wind capacity worldwide. Germany and its European neighbors however remain far ahead of the U.S. when it comes to taking advantage of offshore wind resources. That may change in the next few years however as the U.S. regulatory, political and business climate becomes more friendly to wind developers looking to go offshore.

The American Wind Energy Association (AWEA) held its Offshore Wind Workshop earlier this month in Boston to look at the progress that has been made for U.S. offshore wind and what hurdles are left to overcome before the first turbine hits the water.

But just which project will get that first turbine in the water is still a matter of speculation. In total there are four companies with more than 10 projects in different states of development. Each company — Cape Wind, Bluewater Wind, Fisherman’s Energy and Deepwater Wind — is developing projects on the East Coast.

The most well-publicized and possibly controversial offshore wind project in the U.S. is Cape Wind. The project, which has spend eight years in development, would put turbines in Massachusetts’ Nantucket Sound. The project had a lot of opposition to overcome, first from residents in towns on the sound worried it would ruin their views and lead to higher electricity prices, and later from environmental groups concerned with the wildlife impact. These issues have since been addressed.

More recently, a group of Native Americans have said the project would obscure the view from an ancient burial ground, this issue is working its way through the regulatory process and is expected to be resolved by the end of 2009.

Not all of the news about Cape Wind has been negative however. The project was given a favorable Environmental Impact Statement from the U.S. Minerals Management Service, its grid connection in Barnstable, Massachusetts was approved by the Massachusetts Citing Board and National Grid has said that it will negotiate a power purchase agreement for the electricity the project might one day produce.

Jim Gordon, president of Cape Wind said that he thinks the U.S. will see an offshore wind project realized sooner rather later and its one of the keys to fighting the effects of climate change, especially for East Coast cities like Boston where trillions of dollars worth of infrastructure could be damaged or destroyed by rising seas and stronger storms that would be a result of climate change and an economy that needs to put people back to work to grow.

“Right now if Cape Wind was operating we would be producing 422 megawatts of clean renewable energy. That’s 422 megawatts of emissions free power that blows off our coast that will be harnessed by workers from this region,” Gordon said. “The Natural Resources Defense Council has said that Cape Wind represents one of the largest single greenhouse gas reduction initiatives in the United States. We’ve missed out these many years on mitigating many tons of greenhouse gases, but I believe and I hope that the American offshore wind industry is no going to emerge and reach its full potential.”

While Massachusetts has been the first stand of sorts for offshore wind, Delaware might be the spot of the industry’s first major victory. Bluewater Wind, formerly owned by Babcock and Brown, and now a subsidiary of NRG Energy, has leases in place and is set to deploy a series of meteorological (met) towers to determine the best sites for turbines in 2010.

The company also has one 200-MW PPA in place with Delmarva Power and has been selected to provide 55 MW of power to the state of Maryland under a PPA. Bluewater CEO Peter Mandelstam said that the company has interconnection agreements in place and also begun the federal permitting process.  He said the process is easier now as a result of the Obama Administration’s renewable energy goals.

“The most important investor, the most important advocate and the most important public official for offshore wind is President Barack Obama. This industry was dead, but the restructuring of the tax credit, the loan guarantees, the various stimulus provisions and the new regulatory regime totally revived us. We can’t say enough good things about President Barack Obama. He mentioned our Delaware project on Earth Day and going into Copenhagen, he talked about offshore as one of his six pillars to mitigating climate change,” Mandelstam said.

Fishermen’s Energy is taking what it calls a community-based approach to offshore wind. The company was founded by leading Northeast commercial fishing companies so that they could be part of and benefit from the emerging offshore renewable energy industry. The company’s CEO Dan Cohen said that commercial fishing executives knew there was a need for workers to do the construction, operations and maintenance for offshore wind projects, jobs uniquely suited to commercial fishermen who already work offshore and the know waters.

Fisherman’s is involved in two projects: the first is a 350-MW project that the company plans to work on in conjunction with Bluewater Wind and Deepwater Wind. The second is demonstration project located in the waters just off the coast of Atlantic City, New Jersey. This 20-MW project is expected to be built by 2012 and rules for the build out of this project are currently drafted by the New Jersey Board of Public Utilities.

Deepwater Wind plans to do exactly what’s implied by its name, namely build projects 15-20 miles offshore, minimizing the impact of not-in-my-backyard (NIMBY) protests and taking advantage of the stronger wind regimes in those waters. The company has been awarded met tower leases and plans to put them in the water in the next year.

Deepwater, which is part of a consortium developing a project in the waters off Long Island, expects that its first project in the water will be the 30-MW Block Island project off the coast of Rhode Island, which is still pending federal approval. In conjunction with this project, the company is also working to develop Quonset Point, a former U.S. Navy base, into a dedicated offshore wind development hub for the Southern New England area.

Some challenges remain however. First and foremost is the lack of the vessels needed to install these projects. There are currently no vessels in the U.S. equipped to install these turbines, and while a number of them exist in Europe they cannot simply be brought across the Atlantic Ocean and put to work.

The Jones Act precludes any European based specialty vessel from taking part in commerce in U.S. waters, including the installation of offshore energy projects. While many have suggested that ships used by the oil industry could simply be converted, the cost would likely be prohibitive and U.S. ship builders will have to build wind specific vessels, which Mandelstam said will create thousands of jobs for ports and ship builders that take advantage of the need.

“Seven thousand seven hundred green jobs would be created by building three turbine installation vessels,” he said. “As chairman of the offshore group in the U.S., I participated during the Bush Administration to analyze how we’d get to 20% wind, including 54,000 MW of offshore wind. The choke point is vessels. The Obama Administration has put up a TIGER Grant and the Philadelphia Regional Port Authority has applied and we may gain access to those vessels if there’s an announcement in February 2010.”

Like any other renewable energy or conventional generating assets, in order for offshore wind projects to be built they will need transmission lines and utilities willing to buy the electricity they carry. In some ways this is where the U.S. industry is putting the cart before the horse.

Transmission plans are already underway within the ISO New England region to bring tens of gigawatts of wind power online and the ISO has produced a report for New England’s Governors Association presenting them with a number of scenarios that would bring offshore wind energy to residents of New England.

Even though this transmission capacity is still in the planning stage, utilities are lining up to buy the power once its online. Delmarva Power, National Grid, the state of Maryland and the Long Island Power Authority have already signed power purchase agreements (PPAs) with developers. The biggest advantage that utilities and ISO New England are looking at is the location of offshore wind resources. Who pays for it however remains the big question.

Gordon van Welie, president of ISO New England said that while his company has made a number of transmission investments onshore, they need to wait for a national renewable energy and transmission plan to be in place before a scenario from their report to governors, most likely costing around $6 billion, is chosen and invested in.

“The rhinoceros in the room is the transmission cost allocation,” Welie said, referring to the fact that who pays for the $6 billion in transmission will depend on who is thought to be getting the most benefit from its installation and costs are likely to be split between project developers, grid operators and utilities.

Possibly the largest challenge facing U.S. offshore wind energy developers however is the lack of a stable policy and incentive regime that would bring more players into the industry, from all sides. No matter the policy, be it feed-in tariff, production tax credit, cash grants or renewable energy credits, developers, financiers, utilities and grid operators are calling for more stable incentives and policies.

Long term policy surety would give banks more confidence investing in infrastructure, transmission, construction operations and maintenance vessels as well as generating equipment. Rhode Island Governor Donand Carcieri, who serves as vice chairman of the Governors’ Wind Energy Coalition said that while the states are leading the way, a federal standard is needed to move forward.

“Offshore wind power is one of the most reliable and sustainable sources of energy in the United States, and we are on the path to develop this nation’s first deep water, offshore wind project,” Governor Carcieri said. “The impact of offshore wind is tremendous, from spurring economic development and new jobs to providing stable energy costs, and will move our country towards energy independence.”