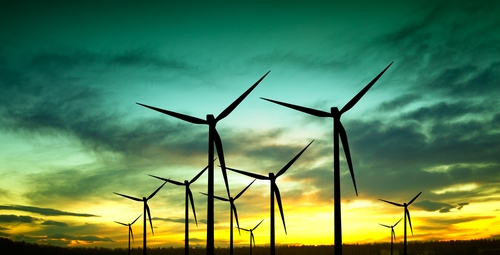 SAO PAULO — Uruguay increased the amount of wind-powered electricity it plans to bring online in coming years, saying it wants to capitalize on cheap turbine prices.

Uruguay plans to cram 1,000 megawatts of wind generation onto its grid by the end of 2015, compared with a September estimate of 800 megawatts, Ramon Mendez, director of energy at the Ministry of Industry, Energy and Mining, said yesterday in a telephone interview. It has about 40 megawatts online now.

“During some windy nights in summer, we will have 80 to 90 percent of our energy coming from wind,” Mendez said. “It’s incredible.”

The 1,000-megawatt addition is almost the maximum the country’s electricity grid can handle, Mendez said. More than half of that may be under construction by year-end, he said.

The average global price of wind turbines has fallen 25 percent to 850,000 euros ($1.1 million) a megawatt since its 2008 peak due to decreased demand as governments including Spain and Italy have cut renewable-energy subsidies following the economic downturn, Eduardo Tabbush, an analyst at Bloomberg New Energy Finance’s London office, said today in a telephone interview.

Uruguay committed to wind energy after an auction in August for 150 megawatts of new projects saw 17 companies offer to sell energy at rates as low as $62.35 a megawatt hour, Mendez said.

“We got an incredible price,” Mendez said. “Any economist will tell you you should develop as much of this as possible.”

In December, the government issued a decree allowing UTE to buy power from the remaining participants at the average rate awarded to the three winners. Developers for 13 of the 20 projects that were denied contracts in the bid agreed to the terms.

In May, a decree was issued allowing large power consumers to erect turbines and sell the excess energy to UTE.

Six projects with 342 megawatts of capacity that were awarded contracts to sell energy to UTE following two auctions held 2010 and 2011 will come online through 2014. The remaining 13 projects with 650 megawatts may be producing power as soon as 2015.

Uruguay has 2,350 megawatts of capacity online including 1,500 megawatts of hydroelectric dams that may be turned on when the wind isn’t blowing, he said.

The nation ascertained through a four-month study that it was able to attach 1,200 megawatts of wind farms to its grid “without any problems,” he said.