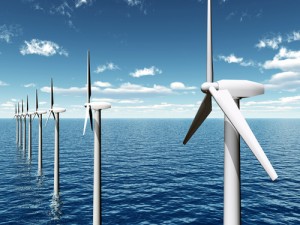 Acting on a concerned reader’s tip, we called and emailed Coast Guard media relations, asking to examine a roster of study working group members and other process-oriented questions. As you can see from the screenshot of my email, the Public Information Office had little to say:

So, on February 25, we submitted a formal Freedom of Information Act (FOIA) request to learn more about the Coast Guard study on offshore wind. You can read it HERE.

Since 2009, the Obama Administration has been aggressively promoting the expansion of commercial offshore wind energy. At a White House Summit on Offshore Wind in late 2015, the Administration announced a number of comprehensive actions designed to build upon “recent activities to oversee responsible development of offshore renewable energy resources.”

In 2011, the Coast Guard formed the Atlantic Coast Port Access Route Study (ACPARS) to study the effect of offshore wind farms on shipping traffic safety and management. According to the ACPARS interim report, a working group was formed to meet these goals, consisting:

“. . . primarily of waterways management specialists from Coast Guard Headquarters, Coast Guard Atlantic Area and Coast Guard Districts One, Five and Seven, but at times also includes other personnel from supporting offices throughout the Coast Guard, the National Oceanic and Atmospheric Administration (NOAA) and the Maritime Administration (MARAD) as needed.”

The stated goal of the study was to “determine what impact the siting, construction and operation of proposed alternative energy facilities may have on existing near coastal users and whether routing measures should be modified or created to ensure the safety of navigation.”

When the ACPARS interim report was released in 2012, the section on the cumulative effect of wind farms was very skeptical, stating:

This runs counter to experience in Europe, which has had offshore wind since the early 1990s. In the North Sea, which has some of the busiest shipping traffic in the world, a number of countries have successfully balanced these interests for years. Not only does the North Sea see more than 260,000 shipping movements annually, it also has two of the largest wind farms in the world.

In total, the North Sea has more than 25 operating wind farms, with ongoing plans to build a total of 10,000 wind turbines.

The ACPARS working group considers a 5-10 nautical mile threshold “broadly acceptable” and “low risk.” But this range is far above the threshold in the North Sea and, if implemented, would prevent the widespread of deployment of offshore wind energy on the Atlantic Coast.

But shipping safety is not the only concern addressed in the ACPARS interim report. According to a section of the interim report titled “Other Offshore Energy Installations:”

“Although the current emphasis off the Atlantic Coast is for offshore wind energy, it is also necessary to consider other exploration and exploitation activities that may occur in the study area in the future, such as hydrokinetics or traditional oil, gas and mineral extraction. The Administration’s and the Nation’s desire for energy independence, all point to further exploration and exploitation of the vast energy potential available from the Atlantic Outer Continental Shelf. This was further reinforced in a letter to President Barack Obama dated March 13, 2012 from the Outer Continental Shelf (OCS) Governors Coalition urging the Administration to speed up permitting and open new offshore areas for traditional and renewable energy projects.”

The group referenced in this section of the report, the Outer Continental Shelf (OCS) Governors Coalition is “a group of coastal state governors who joined together in May 2011 to promote a constructive dialogue on OCS energy-resource planning and development between state and federal governments.”

This coalition has deep ties to the fossil fuel industry. Some members of the industry, such as the Koch brothers, have declared “war” on offshore wind.

Although the final report, due in a month, may differ, Checks and Balances Project believes the Coast Guard should answer a few basic questions about ACPARS on behalf of the public:

According to an Environmental and Energy Study Institute fact sheet, “Europe has more than 90 percent of the world’s total offshore wind capacity.” Accounting for differences in offshore wind potential, one of the most important factors in this phenomenal growth has been European governments working in close partnerships with the commercial wind industry, the shipping industry and environmental groups to minimize impacts.

Most studies believe that the potential for offshore wind in the United States is “staggering.” We’re looking forward to learning more about who is guiding the Coast Guard study on offshore wind to ensure the process is transparent and accountable.