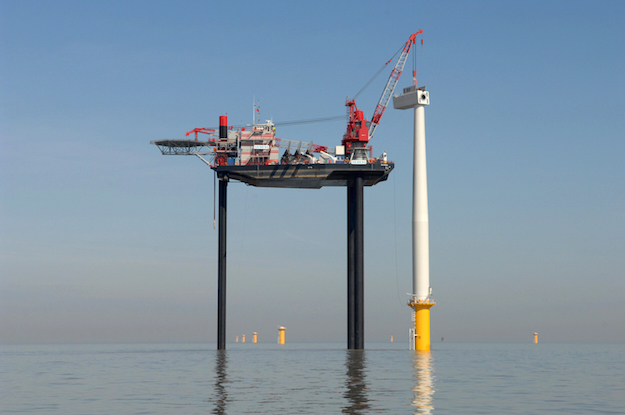 The U.K. government rejected a 5.4 billion-pound ($8.3 billion) proposal to build a giant offshore wind farm in Navitus Bay, saying it would harm protected views from a coast designated as a World Heritage Site.

The project was a joint venture between U.K.-based renewables developers Eneco Wind U.K. Ltd. and EDF Energy Renewables Ltd. They applied to build the 970 MW facility in the English Channel near Bournemouth and the Isle of Wight. The scale of the plan was reduced three times since 2010, from an original proposal of 1.2 GW.

The move is the first time Prime Minister David Cameron’s government shelved an infrastructure identified as significant to the needs of the nation. The Conservative government has given more weight to concerns that wind farms are blighting landscapes and pledged to halt the spread of onshore turbines.

“Characterizing this as a huge blow to renewable energy is probably going a bit far,” Angus Walker, partner and head of planning at at the legal firm Bircham Dyson Bell LLP, said. “All the other offshore wind farms promoted under the Planning Act 2008 have been approved and this one is something of a special case given its proximity to the Jurassic Coast,” a region on the coast of the English Channel that was the U.K.’s first natural World Heritage Site.

The Department of Energy & Climate Change said in a statement on Friday that the wind farm development “would not contribute to the quality of the area but would cause significant harm to it.” It cited the visual impact, the potential effect on tourism and mariner safety.

The completed Navitus Bay wind farm would have been visible as specks on the horizon 14.7 kilometers (9.1 miles) away, according to the developers, who submitted photos as part of the planning application. The facility also would have created 1,700 jobs.

The developers estimated the total cost of the project at almost 5.4 billion pounds, of which almost 55% would have been capital expenditure. The remaining would be invested in operating the wind park over its anticipated 25-year life and final decommissioning. The discounted project cost would be almost 3.6 billion pounds in 2013 prices, according to a document on the developer’s website.

MHI Vestas Offshore Wind A/S, a joint venture of the Danish manufacturer Vestas Wind Systems A/S and Mitsubishi Heavy Industries Ltd., had entered into a conditional agreement this year to supply 121 turbines to the project. It had also reopened up a blade factory on the Isle of Wight in May with the intention of supplying the wind farm, said Keegan Kruger, wind analyst at Bloomberg New Energy Finance.

Jan de Nul U.K. Ltd. and GeoSea NV were two companies in line to bid for a tender for the construction of the plant, he said.

“The coastline is a UNESCO World Heritage site, and there was outcry from local communities from the start,” Kruger said. “The number of times they reduced the turbines both in number and size shows that the developers tried to comply, but it clearly didn’t go far enough.”

Greenpeace Chief Scientist Doug Parr said the government has been inconsistent in scrapping the wind farm while opening protected areas on the Isle of Wight to natural gas fracking.

“Whilst government is happy to reject a nearby offshore wind on the grounds of aesthetics, it puts up a vast swathe of land on the Isle of Wight, which is Areas of Outstanding Beauty, as a major potential fracking site,” Parr said. “Just like the rest of their energy policy, this decision reeks of incoherence at the heart of government thinking.”