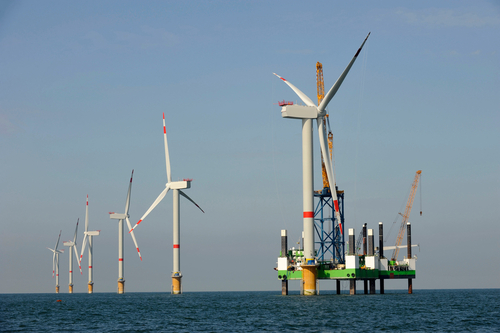 The world’s biggest offshore wind power market may be about to get even bigger as three companies decide whether they’ll commit 7.5 billion euros ($8.4 billion) to raise the U.K.’s installed offshore capacity by more than a third.

The U.K. has the world’s biggest offshore wind-power market with more than 5 GW, equal to 45 percent of installed capacity, according to the European Wind Energy Association. In November, Amber Rudd, the U.K.’s Energy and Climate Change Secretary, pledged to support the growth of turbines installed at sea and predicted offshore capacity could double by 2020 and rise to 30 GW by 2030.

Investments would further boost the U.K.’s wind industry following Dong Energy A/S’s decision this month to move ahead with its estimated $5.7 billion Hornsea Project One, which will become the world’s biggest offshore wind farm when it’s completed in 2020. The U.K.’s renewable energy industry is pinning its hopes on offshore-wind power as the only technology that hasn’t seen subsidies cut under David Cameron’s government.

A spokesman for SSE confirmed a final investment decision for the 588-MW Beatrice wind farm is expected at the end of March. SSE owns 40 percent of Beatrice, alongside Copenhagen Infrastructure Partners and Repsol SA. A spokesman for Scottish Power said a decision on the 749-MW East Anglia One wind farm is due before April.

Last month Mainstream said it is in talks with a consortium led by Intergen NV to reach financial close on the 450-MW project. Questions hover over Mainstream’s Neart na Gaoithe project because of a legal battle with RSPB, which says that the wind turbines would kill too many sea birds if erected. A spokesman for Mainstream did not immediately respond to a request for comment.

Under rules imposed by the Low Carbon Contracts Company, which operates the U.K. government’s subsidy program, developers have until the end of March to decide on going ahead with the projects or risk losing their contracts and being barred from entering the next round of auctions.

A spokesman for the Department of Energy and Climate Change did not immediately respond to a request for comment.