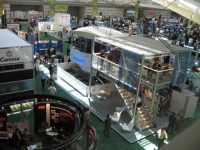 The steady growth in conference numbers is a small representation of how much the U.S. wind market has grown in recent years, said Christine Real de Azua, spokesperson for AWEA. Earlier this month, the organization reported the U.S. wind energy industry is on track to install more than 3,000 megawatts (MW) of wind power generating capacity nationwide this year.

“The spectacular growth of the conference mirrors the wind energy growth that we’ve seen in this country,” said Real de Azua, noting the economic, environmental and energy security benefits associated with the technology. “At the same time, we’re creating a lot of business opportunities. I think that’s what we’re going to be seeing on the show floor, a lot of buzz around transactions being discussed … and new developments being revealed, and all of this laying the groundwork for wind to be a vital element of [the U.S.] electricity portfolio.”

International interest in the U.S. market has grown significantly as well, said Real de Azua, and the so has number of companies opening manufacturing facilities in the U.S. Many of these industry giants will be exhibiting at the show, including Acciona Energy, Clipper WindPower, DeWind, Ecotecnia, Fuhrlaender AG, Gamesa, GE Energy, Mitsubishi, Nordex, Nordic Windpower, REpower Systems, Siemens, Suzlon Wind Energy, and Vestas—to name a few.

But along with the opportunities that come with such a large amount of growth in a relatively small time period, come an equal amount of challenges. With a theme focused on “growing the wind energy business,” WINDPOWER 2007 sessions will focus on highlighting the industry’s overall potential as well as identifying the barriers in technology, policy and the broader imperatives that drive wind energy development.

“Many of the key challenges are mostly policy related and that’s where, as an association, we’re trying to play a role, and industry members can help on that front as well. The policy changes are basically the absence, still today, of long-term government support of renewable energy, and wind power in particular,” said Real de Azua. “Our policy priorities are to secure the long-term extension of the production tax credit—scheduled to expire in December 2008; a federal renewable portfolio standard; and transmission policies and investment to remove barriers to transmission access.”

In addition to specific policy sessions, WINDPOWER 2007 attendees can expect updates on policy developments taking place on Capitol Hill. One these much anticipated and controversial developments affecting the U.S. wind industry is the anti-wind provisions of H.R. 2337.

As reported in Wind Energy Weekly last month, provisions in the bill would burden the wind power industry with new requirements that have never applied to other energy sectors. Specifically subtitle D of the bill would direct the U.S. Fish & Wildlife Service (USFWS) to review every existing and planned wind project, a mandate far beyond the agency’s resources and capabilities, and criminalize operation of wind energy facilities not formally certified by USFWS. Under the legislation, landowners and farmers with wind turbines on their property would be subject to invasive inspection requirements at any time; landowners and farmers could face one year in jail or a $50,000 penalty for constructing or operating an uncertified wind turbine, regardless of whether it is for personal use or on a commercial scale.

From to policy updates on bills such as H.R. 2337 to a turbine vendor forum to U.S. project development overviews, WINDPOWER 2007 will include more than 250 speakers and moderators, 175 poster presentations and 50 sessions organized into tracks that—along with policy—include business and legal issues, utility and transmission, global perspectives, radar and siting updates, and small wind and technical focuses.

For complete conference coverage of the WINDPOWER 2007 Conference & Exhibition being held June 3-6 at the Los Angeles Convention Center, be sure to check out RenewableEnergyAccess.com’s Special Event Coverage.