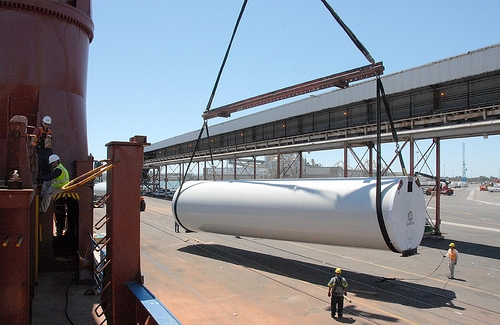 The U.S. Commerce Department set tariffs as high as 73 percent on imports of wind towers from China and as much as 60 percent on similar goods from Vietnam, adding further restrictions on clean-energy imports from Asia.

The agency concluded in preliminary findings today that producers in the two nations, which exported $301 million in wind towers to the U.S. in 2011, sold the utility-scale towers below production costs. The department acted on a complaint by U.S. manufacturers including Broadwind Energy Inc. of Naperville, Ill. Broadwind rose as much as 19 percent today in Nasdaq Stock Market trading.

“China has ramped up the wind-tower production and done it in a way that is not reflective of market forces,” said Scott Paul, the executive director for the Washington-based Alliance for American Manufacturing. “I’m hopeful these tariffs will give the American wind-energy manufacturers the breathing space to compete for more market space in the U.S.”

The U.S. has imposed duties on numerous types of renewable energy products from China in recent months, prompting retaliation in an escalation of trade tensions between the world’s two largest economies. President Barack Obama and Republican presidential candidate Mitt Romney have pledged stronger enforcement of trade actions against China, ahead of U.S. elections in November.

The Wind Tower Trade Coalition, a group of U.S. manufacturers, in December filed its complaint against Chinese producers with the Obama administration. The group also includes Otter Tail Corp.’s DMI Industries, Katana Summit LLC and a unit of Trinity Industries Inc., along with Broadwind. Broadwind rose 5 cents, or 17 percent, to 31 cents at 3:05 p.m. in Nasdaq Stock Market trading.

The anti-dumping measures for Chinese wind-tower exporters include a 21 percent duty for Titan Wind Energy Suzhou Co., according to a Commerce Department fact sheet. CS Wind Corp., Sinovel Wind Group Co. and Guodian United Power Technology Baoding Co. will be subject to duties of 26 percent. Chengxi Shipyard Co. received duties of 31 percent, and all other Chinese producers and exporters will pay the 73 percent rate.

CS Wind’s Vietnamese unit will be subject to a 53 percent duty, while all other exporters and manufacturers in the country received a 60 percent rate.

The Commerce Department will make a final determination for both nations on Dec. 16. In the meantime, U.S. Customs and Border Protection officers will collect duties based on the rates announced today.

The Commerce Department on May 30 set duties as high as 26 percent on wind-tower imports from China to compensate for government subsidies, siding with U.S. manufacturers.

The U.S. imported about $222 million of utility-scale wind towers — the steel structures that support engines and turbine blades — from China last year, according to the agency. Similar imports from Vietnam were valued at $79 million.

The Commerce Department on May 17 set anti-dumping tariffs of 31 percent to 250 percent on imports of Chinese solar-energy products, after a complaint by manufacturers including the U.S. unit of SolarWorld AG. The agency in March announced duties of as much as 4.73 percent to offset subsidies received from China’s government, and last month determined that the country’s producers benefited from additional state support. A final ruling on those duties is scheduled for October.

In a complaint May 24 to the Geneva-based World Trade Organization, China’s Ministry of Commerce said renewable-energy programs in California, Massachusetts, New Jersey, Ohio and Washington state violate global trade policies. The nation has also said it filed a complaint at the WTO, alleging that U.S. anti-subsidy duties undercut $7.3 billion in Chinese products including solar panels.