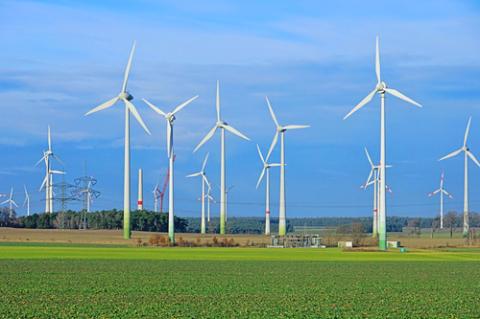 Wind output rose to as much as 6,053 megawatts at 2:10 p.m. London time today, beating a previous record on Sept. 15 and accounting for 14 percent of total supply, according to National Grid Plc data on Bloomberg. Generators halted 7,872 megawatts of gas-fired plants since yesterday, grid data show.

The U.K. plans to almost triple the amount of wind capacity by 2020 as it seeks to meet a target to get 15 percent of power demand from renewable energy sources. Wind and solar have no fuel costs, generally making them cheaper than coal or gas.

“As well as the higher wind power, demand is down by about 2 gigawatts from yesterday as well so it has given the chance for less efficient gas-burn facilities to drop output,” Gary Hornby, energy markets analyst at Inenco Group Ltd., said by e- mail today.

Wind may generate an average of 5,301 megawatts for the rest of today, 5 percent more than yesterday, according to Bloomberg’s wind model at 16:55 a.m.

Power demand is forecast to peak at 49,902 megawatts at 5 p.m. today, 6 percent less than yesterday’s maximum of 52,815 megawatts, according to National Grid data. Gas was generating 14,064 megawatts of power at 5 p.m., compared with 21,803 megawatts at the same time yesterday, grid data show.

“Wind will peak today, before slumping considerably overnight,” Byron Drew, lead forecaster at MetraWeather said in an e-mailed report. “It will then increase considerably toward the end of next week and next weekend as low pressure becomes influential.”

Wind generation is forecast to average 2,103 megawatts next week and is set to peak at 4,844 megawatts at 6 p.m. on Dec. 5, according to Bloomberg’s wind model. The U.K. got 8.2 percent or 1,952 gigawatt-hours of its power from wind in October, up from 5.8 percent the previous month, according to data compiled by Bloomberg Industries.

Power for today settled at 52.55 pounds a megawatt-hour, down 5 pounds from the previous day, in an auction on the U.K.’s N2EX exchange yesterday.

The U.K. seeks to install a total of 18 gigawatts of offshore wind farms and 13 gigawatts of onshore turbines by 2020. Current combined capacity is about 10.4 gigawatts, according to RenewableUK, a lobby group.

“We’re generating from a home-grown source which gives us a secure supply of power at cost we can control, rather than leaving ourselves exposed to the global fluctuation in fossil fuel prices which have driven bills up,” Jennifer Webber, a RenewableUK spokeswoman, said by e-mail. “Wind energy is consistently setting new records.”