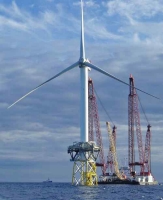 Each turbine stands on five tower segments made of steel, and both have a hub height of 117 meters and a rotor diameter of 126 meters. When spinning, the 61.5-meter long rotor blades, transported by heavy-load trucks from Denmark to the building site, will cover an area of 12,469 square meters (roughly two football fields). “Both turbines are supposed to be connected to the grid and start operating in December,” said Jens Goesswein, Project Manager for the offshore division at REpower. “Then, depending on the wind speeds, the rotor spins up to twelve times per minute. The location of the test field near a North Sea dyke is perfectly suited for testing the operating performance under realistic wind conditions.” The first completed turbine was built for the utility EWE AG (Oldenburg/Lower Saxony), the second one for the EWC Windpark Cuxhaven GmbH, a joint venture of E.ON Energy Projects GmbH (Munich) and Essent Wind Deutschland GmbH (Duesseldorf). In 2007, the company has plans to erect six more 5M turbines.