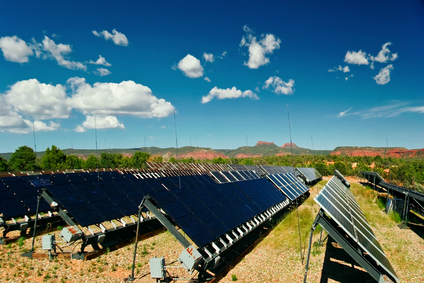 Tucson Electric Power (TEP) said Nov. 4 that it is seeking bids for the design and construction of large new renewable energy resources, including a community-scale solar array that could power more than 21,000 homes.

TEP issued a request for proposals (RFP) Nov. 4 that would enable it to purchase power from a solar facility with up to 100 MW of capacity under a 20-year agreement. The project, which could be built within TEP’s service territory or tied into existing transmission facilities, would boost TEP’s total community-scale solar energy resources by nearly 40 percent. The new solar facility would begin producing power in early 2019.

TEP is working to deliver at least 30 percent of its power from renewable resources by 2030, doubling the state’s 2025 goal. TEP anticipates an additional 800 MW of new renewable capacity by the end of 2030, boosting its total renewable energy portfolio to approximately 1,200 MW.

Prices for solar power from large solar facilities purchased through long-term agreements are about one-fourth of what they were just five years ago, the utility noted. The costs of installing utility-scale solar systems fell by about 12 percent in 2015 alone, according to a recent U.S. Department of Energy study.

TEP also is evaluating proposals submitted for a new 100-MW wind facility that would be built and owned by a project partner. According to the proposal, TEP would buy power from the new facility for up to 20 years, more than doubling its current wind-powered capacity of about 80 MW.

“Although we’ll primarily rely on solar energy to expand our renewable energy resources, the addition of new, cost-effective wind-powered resources would help to ensure reliability for our customers while further diversifying our renewable generation portfolio,” Tilghman said.

In a request for proposals, TEP had stated that it was looking for projects that can tie into the company’s transmission facilities located in the Four Corners region and along the Arizona/New Mexico border from geographic areas with productive wind resources.

Both RFPs are being managed by New Hampshire-based Accion Group.

Renewable resources play an important part in TEP’s increasingly diverse generating portfolio. The company has ceased burning coal at the H. Wilson Sundt station in Tucson and will retire 170 MW of coal-fired capacity when Unit 2 at the San Juan station in New Mexico is shut down next year. TEP has options to eliminate additional coal-fired capacity over the next 15 years. TEP has approximately 330 MW of total renewable generating capacity.

TEP provides electric service to approximately 417,000 customers in southern Arizona. TEP is part of UNS Energy, which is under Fortis Inc., which owns utilities that serve more than 3 million customers across Canada and in the U.S. and Caribbean.